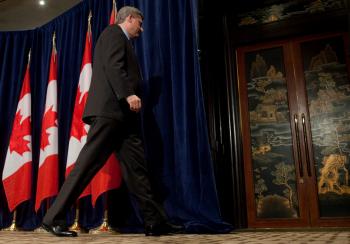 In China, Harper Wins Carrot Despite the Stick

At the same time, Harper was publicly spanked by Premier Wen Jiabao, who essentially said all the criticisms of Harper in China's state-controlled press are true. Chinese media have been critical of Harper's long delay in coming to China. Harper took office in Feb. 2006.

Opposition parties in Canada, smelling political gain from the rare public rebuke of their head of state, have echoed the words of the communist leader, claiming Harper brought this on himself by daring to mention human rights concerns in China publicly and not personally travelling to China sooner.

But they've ignored the flip side, most notably, the deal that the last two Liberal governments (who often tucked human rights talk behind closed doors) were never able to achieve, approved destination status. Harper scored it, in his first full day of meetings.

What explains the two extremes?

The most reasonable explanation is carrot and stick.

The Chinese regime has been deeply concerned about Harper because of his strong stance on rights in China. Harper has mentioned his concerns publicly, though briefly, and his government put an end to the bilateral closed-door human rights dialogue (a report commissioned by the last Liberal government found the dialogue largely ineffectual).

Chinese communist authorities fear attention to their abuses because it would impact the legitimacy of the regime at home and abroad. This is why they've worked hard to get foreign governments to only mention human rights behind closed doors. When relegated to closed-door talks, the regime can avoid actually doing anything substantive. The dialogues also provide a veil of progress on human rights that couldn't be further from the truth.

Canada, in particular, carries weight because it is inherently respected in China. Its voice on the world stage thus carries more weight in China than its size dictates.

When Harper famously said in 2006 that he wouldn't "sell out" Canadian values like human rights for the "all-mighty dollar," Chinese leaders were stirred and didn't know how to respond—first cancelling and then uncancelling a meeting with Harper. No doubt, they've thought carefully about how to bring Harper into line, including their plans for his long-awaited first trip.

In other words, Harper's tough stance has attracted attention, and from one angle has created leverage and influence for Canada.

Prime Ministers Chretien and Martin were never scolded publicly by Chinese officials this way (nor was any other leader I can think of), but both laboured on the approved destination file and came away empty-handed. Harper is receiving the carrot and the stick because the Chinese see him as out of line and are concerned. They don't fear leaders who they've convinced to play nice in public. In fact, according to former Chinese diplomat Chen Yonglin, they laugh about them privately.

“Canada should learn how to deal with a non-democratic regime like China,” Chen has told The Epoch Times. “Pressure is the only language that a dictatorship can understand.”

Australia provides another example of where a tough stance on China does not mean losses for the national interest. Trade between Australia and China has continued to shoot up despite a very public and bitter dispute between Kevin Rudd's government and the Chinese. In August, amid tensions over the Rio Tinto incident and Australia's welcoming Chinese dissident Rebiya Kadeer, the two signed their biggest trade deal ever, a gas deal valued at $41 billion.

The same is true in Canada. Trade, including exports to China have only continued to rise under Harper, at an increased pace by some measures, compared to countries softer on rights.

This fact is the core argument behind Amnesty International's call for Harper to continue to press for human rights. In a recent press conference on Parliament Hill, Amnesty's Canada secretary-general, Alex Neve, made the case that raising human rights helps, rather than hurts, Canada-China trade.

Even if those facts don't prove that a tough stance brings economic benefits, they do seem to deflate the argument that it hurts.

When Harper suggested in 2006 that Canada need not fear upsetting the Chinese by respectfully raising concerns about human rights publicly, because China needed our trade as much or more than we needed theirs (China largely imports raw materials and resources from Canada that it needs anyway, while Canada on the contrary imports many inexpensive goods that China wants to sell), he was on to something.

China depends on foreign markets for its goods and Canada's trade deficit with China comes partially at the expense of our own manufacturing sector.

It is sad today to see our opposition leaders rallying to the side of the communist authorities in China, ignoring the leverage Harper's principled stance has brought.

Though now embarrassed by the Chinese for his stance, it would be a mistake for Harper to follow his critics and exchange this leverage in one fell swoop.