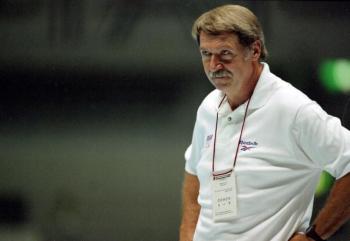 A renowned former U.S. gymnastics coach and NBC commentator at the Games, Karolyi was upset at what he called China’s arrogance in using girls who he was convinced weren’t old enough to compete in the Games.

"They are using half-people," Karolyi told the Associated Press. "These people think we are stupid,” he said, estimating that the Chinese competitors were no more that 14 years old.

“We are in the business of gymnastics and we know what a kid of 14 or 15 or 16 looks like. You don't have to be a gymnastics coach to know what they look like at 16."

Currently, the International Gymnastics Federation (FIG) requires that all competitors must turn 16 during an Olympic year. Many, including Karolyi, feel that this rule is seriously flawed and open to abuse.

"Since they forced an age limit, it has gotten worse and worse. The FIG is running away from the age problem. They set an age limit and now they can't control it," Karolyi said in the AP interview.

FIG officials have accepted passports from the Chinese competitors in question, all of which indicate that they meet the age requirements. But Karolyi, who is originally from Romania, says that falsifying documents is a very common practice in countries ruled by totalitarian regimes such as those in Romania, Russia and other former Soviet-bloc nations.

However, Karolyi had many good things to say about the skills and competitiveness of the Chinese athletes in their events. His issue was not with the athletes but with those who irresponsibly use them in the pursuit of Olympic glory.

“They do good gymnastics and are a good service for the sport. They have the ultimate effective training program. That's why I am more upset that they are cheating. They don't need cheating. There would be just as good a lineup of eligible athletes."