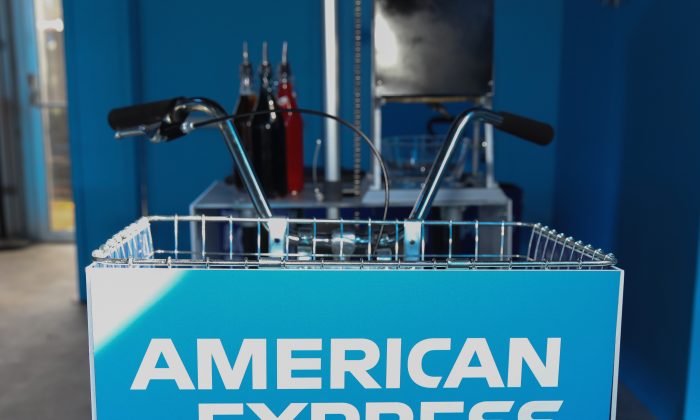 An American Express sign is seen Oct. 5 in Austin, Texas. The card issuer has been approved to operate a payments network in China. (Rick Kern/Getty Images for American Express)
China Business & Economy

An affiliate of American Express Co. gained approval for a payments license from Beijing to begin building a payments network and settle card charges.

American Express (AmEx) is the first foreign company to obtain approval for such a license from the People’s Bank of China.

Given the structure of the Chinese payments industry, the approval may, in fact, be little more than an empty gesture to gain political capital ahead of a planned meeting between Chinese Communist Party leader Xi Jinping and President Donald Trump at the G20 summit later this month.

With the approval, Express (Hangzhou) Technology Services Co., a joint-venture between AmEx and Chinese fintech company LianLian, will operate a credit card-payment network that will allow AmEx-branded cards to be used, cleared, and settled domestically. AmEx will earn a fee on such charges, which will be accretive to revenue should the venture prove profitable.

The decision shows that China is bowing, at least nominally, to pressure by the Trump administration. Trump has been critical of China’s financial services industry, which is largely closed to foreign competition.

Six years ago, the World Trade Organization ruled that China discriminated against foreign card issuers. But little progress had been made on opening the industry.

A subsidiary of California-based Visa Inc. also submitted an application for payments license last year, but hasn’t yet obtained approval from the Chinese regime.

Allowing AmEx—and potentially Visa—to operate in China makes positive headlines, but neither company should be expected to become a major player in the Chinese payments space.

The Chinese credit-card sector is currently a monopoly dominated by state-owned China UnionPay, which controls more than 90 percent of the market. There is little incentive for most Chinese consumers to switch to another card issuer.

Another challenge facing new card entrants is its usage rate—charging purchases to a card isn’t prevalent among Chinese consumers. Unlike in the United States, where “plastic” has been used since the 1970s, Chinese consumers have only recently graduated from using cash exclusively.

Most consumers have skipped adoption of credit cards in favor of mobile payments.

“China has leapfrogged checks and cards … and gone straight from cash to mobile,” said Neil Shah, a research director at Counterpoint Research in Mumbai, according to American Banker magazine.

Tencent’s WeChat Pay and Alibaba’s Alipay hold dominant positions in the mobile payments sector—with a combined 90 percent market share during 2017. EMarketer forecasts that 525 million people in China will use mobile payments this year, or 45.2 percent of the population.

“Mobile payment use has also been hastened by the widespread adoption of QR codes in China, which lower the cost barrier for merchants and make processing transactions dead simple for shoppers,” said eMarketer senior analyst Rahul Chadha.

The QR code is a diagram unique to the individual and is linked to his or her mobile wallet. At checkout, the mobile phone will display the QR code for the merchant to scan.

The reverse also works. Merchants who don’t have a modern point-of-sale system can simply print out its own QR code and stick it somewhere near the register. The customer will take out his or her mobile phone and snap a photo of the merchant’s QR code to make a payment to the merchant.

Security issues aside, it’s quick, simple, and low-cost for the merchant. The convenience of mobile payments makes credit card processing—which is slow and costs merchants 2 and 3 percent of the transaction price in the United States—an unattractive solution.

One area AmEx can establish a beachhead in is cross-border transactions. While a fair amount of merchants in major U.S. cities accept China UnionPay, most Chinese tourists elect to pay cash for purchases abroad.

Going forward, Chinese residents fond of shopping and traveling abroad can carry their AmEx-branded cards and conveniently and securely transact like a local. Millions of Chinese people travel abroad annually, spending an average of 7,300 yuan ($1,050) per trip, according to mainland China-based Travel Weekly China.

Even if AmEx and other U.S. card issuers can grab a portion of those charges, it’s only a small consolation prize.