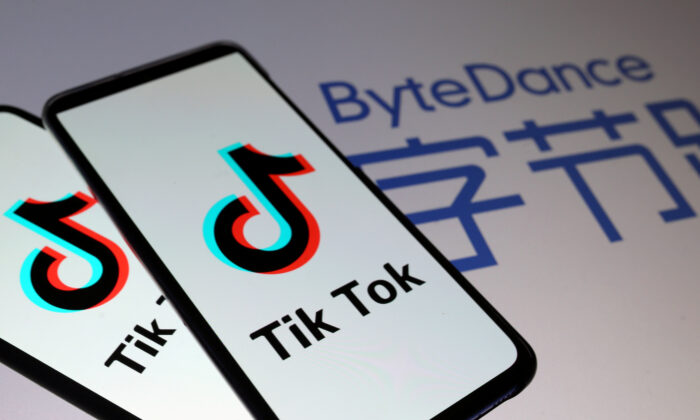 TikTok logos are seen on smartphones in front of a ByteDance logo in a file illustration. (Dado Ruvic/Illustration/Reuters)
Chinese Regime

A Chinese government public relations agency asked TikTok to set up an account that would target Westerners and improve China’s image but wasn’t overtly linked to the government, according to Bloomberg and based on an internal message provided to them.

In an email received in April 2020 by Elizabeth Kanter, the head of TikTok’s government relations department for the UK, Ireland, the Netherlands, and Israel, a colleague remarked: “Chinese government entity that’s interested in joining TikTok but would not want to be openly seen as a government account as the main purpose is for promoting content that showcases the best side of China (some sort of propaganda).”

The source indicated that some of the highest level government relations team at TikTok’s parent company, Beijing-based ByteDance Inc., had discussed the matter internally, and decided to reject the request, describing it as “sensitive.” The incident also triggered internal discussions about other sensitive requests, the message noted, according to Bloomberg’s report.

TikTok is a short video sharing app with more than 1 billion active users worldwide, with the majority being young people. Despite its growing worldwide popularity, Tiktok constantly faces intense criticism from governments around the world.

A recent report shows that TikTok is excessively collecting personal data from its users and that the server of its operating system is connected to China.

Australian cyber security company Internet 2.0 released an investigation report on July 17, saying that by analyzing and testing the source code of TikTok’s apps on Android 25.1.3 and Apple iOS 25.1.1, it was found that TikTok not only retrieves all apps running on the phone, but all installed apps.

“In theory this information can provide a realistic diagram of your phone,” the report said.

TikTok checks the device location at least once an hour, and also gets access to the user’s contacts, and if the user refuses, it will keep asking until the user grants access.

“Also of note is that TikTok IOS 25.1.1 has a server connection to mainland China which is run by a top 100 Chinese cyber security and data company Guizhou Baishan Cloud Technology Co., Ltd,” the report said.

The report concludes that most of the access ability and data collection is unnecessary for the Tiktop application to function properly.

“This leads us to believe that the only reason this information has been gathered is for data harvesting.”

There are currently about 80 million TikTok users in the United States.

China expert Shi Shan said on the NTDTV current affairs program Pinnacle View that TikTok is harmful to Americans in two ways. First, it is a propaganda machine that brainwashes its audiences and manipulates public opinion. Second, its data collection invades personal privacy.

“According to law and regulations inside China, Chinese companies must share data with the communist regime. The regime is hungry for Big Data, because in the age of artificial intelligence, whoever has the most data will be the most competitive country,” Shi said.

“It is a cognitive warfare, an information warfare, psychological warfare,” he said. “It must not be tolerated in the international system of law.”

He called on parents in the United States to take action immediately to remove the TikTok app and all China-related apps from their family’s phones, because Beijing seeks to weaken its enemy, the United States and its Western allies, from within, through these weaponized apps.

The Epoch Times reporter called ByteDance headquarter for comments more than a dozen times, but the person answering the call hung up every time.