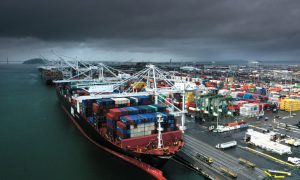 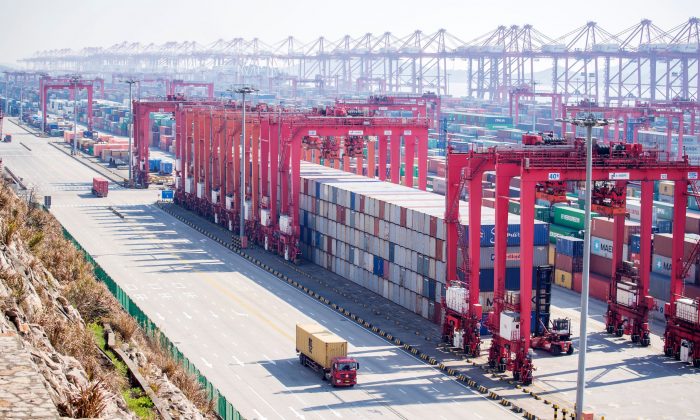 Containers with Chinese goods are organized for trade at the Yangshan Deep Water Port in Shanghai on Feb. 13, 2017. (Johannes Eisele/AFP/Getty Images)
US-China Relations

USCC expects recently announced tariff increases by both the United States and China will lead to further contraction in both imports and exports for the months ahead.

Outsourcing of U.S. goods production is at the center of the Sino-U.S. trade war. It is estimated that U.S. corporate overseas affiliates employed 14.3 million workers mostly in technology, manufacturing, human resources and call centers. That amounts to almost 2.4 times the 6 million unemployed U.S. legal residents, according to the latest report from the U.S. Bureau of Labor Statistics.

Despite the Sino-U.S. trade war shrinking exports to push China into its first negative balance of payments in 25 years, Beijing cut taxes by $163.7 billion (1.17 trillion yuan) in January and another $70.8 billion (506.5 billion yuan) in June to steady employment.

USCC’s analysis found that China was able to avoid violating the national deficit target of 2.8 percent of GDP by cost-shifting to local governments the burden of continuing to fund expanding infrastructure spending with less revenue. As a result, local government ran a $17.3 billion (123.4 billion yuan) deficit in the first half of 2019.

USCC warns the “policy strategy” is creating challenges for local government balance sheets, which are now caught between fiscal stimulus and tax cuts. As a result, every province, except Shanghai, expanded their budget deficit in the first half of 2019, compared to 2018. Revenues contracted in 11 provinces and decelerated in 12 others.

For Guangdong, which has the largest provincial budget and is China’s least debt-laden province, tax revenue growth decelerated from 13.3 percent year-on-year in the first half of 2018 to 2.4 percent versus last year; while expenditure growth accelerated from 3.4 percent to 13 percent.

Guangdong has joined other provinces in selling off or leasing state-owned assets to raise extra revenues. According to Chinese business and financial journal Caixin, Guangdong sales generated $5.6 billion (40 billion yuan), up 65 percent over the same period last year.