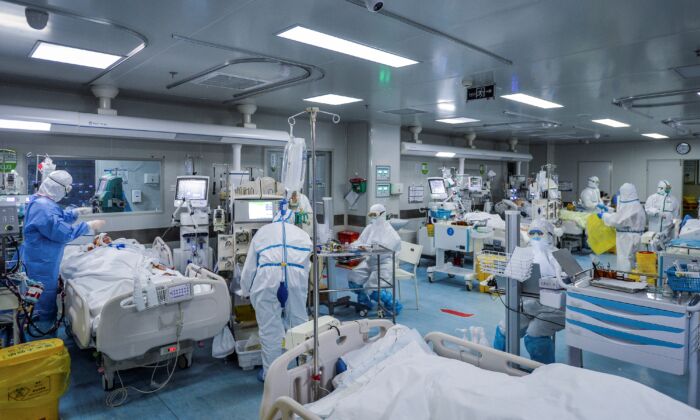 Medical staff treat patients infected by the COVID-19 CCP virus at a hospital in Wuhan, China, on Feb. 24, 2020. (STR/AFP via Getty Images)

Now that the world is awash in the COVID-19 pandemic, the Chinese Communist Party (CCP) is doing what it does best: put the blame anywhere and everywhere else but where it belongs.

The blame for the outbreak, of course, belongs squarely with the Party itself and no one else.

But Chinese government officials have now openly speculated about U.S. responsibility for the outbreak and even accused the U.S. military of planting the virus in China. At the same time, other officials are sticking to the unsubstantiated Wuhan market story to explain the outbreak.

The latest words of deflection came from at least two high-ranking Chinese officials this week, in response to comments made by U.S. national security adviser Robert O’Brien.

O’Brien said that the delayed reaction and deception on the part of the Chinese regime “probably cost the world two months when it could have been preparing for the outbreak.”

O’Brien is right, of course. It is well-documented that the Party prevented discussion of the outbreak that occurred as early as October of 2019, arrested medical professionals who tried to sound the alarm to the country, censored internet traffic about it, and delayed deploying preventative measures by weeks and months.

All of these failures by the Party leadership enabled an outbreak that was eminently containable to rapidly rise to a nationwide epidemic and eventually to where we are now, in a global pandemic. Again, that timeline is documented.

Within a day, however, Chinese Foreign Ministry spokesman Zhao Lijian responded to O’Brien’s accusations on Twitter in English, writing:

“When did patient zero begin in US? How many people are infected? What are the names of the hospitals? It might be US army who brought the epidemic to Wuhan. Be transparent! Make public your data! US owe us an explanation!”

Such a detailed response was undoubtedly ordered and approved at the very top of the Party, which must have felt the need to respond. What’s more, the tone of the response reveals the deep concern of the Party leadership regarding its damaged credibility within the minds of the Chinese people.

The Chinese people are rightfully angry at their government for the gross mistreatment of doctors, such as Dr. Li Wenliang, who was prevented from warning people about the danger in the very early days of the outbreak. Li was eventually arrested, forced to sign a bogus confession, and died on Feb. 7 from the disease that, according to the CCP, was no threat to the public.

The Party’s recent censoring of another doctor, Ai Fen, who works at a medical center in Wuhan, has generated a massive new wave of public anger. Fen was censored for repeating the reality that the state missed opportunities to contain the virus.

A Massive Response to Censorship

And yet, the Chinese people are finding incredibly resourceful ways around the Party’s censorship, including 3,000-year-old, outdated versions of Chinese characters, to express their anger toward their governments’ policies of delay, deflect, deny, and destroy toward anyone who second-guesses its authority or competency.

Foreign Ministry spokesman Geng Shuang called the United States “immoral and irresponsible” for saying that Beijing’s delayed response to the coronavirus outbreak made it worse.

Furthermore, China state-run media has attacked the United States on a variety of ideological fronts, declaring that Western values and democracy are insufficient to fight the coronavirus, that racism and income inequality will mean unequal treatment, and more.

In an ironic twist, China’s Global Times has accused the United States of the “politicization of the virus” to gain negotiation advantage in the trade war and to punish Huawei, as well as harboring “anti-Asian sentiments” and other nefarious motives.

Not surprisingly, in the wake of its massive outbreak, Iran has ramped up its propaganda to an entirely new level.

The regime in Tehran is blaming the United States for “waging biowarfare” against Iran. That’s quite a charge, accusing the United States of an act of biological warfare. Why would Tehran make such a claim? The answer is simple—Iran’s government is literally ground-zero for the country’s infection. The outbreak has decimated the Iranian leadership, with 10 percent of the ruling government members either infected or dying.

But given its close relationship with China and its obvious lack of preparation for the outbreak, Iran’s high infection rate should have been expected. But the truth isn’t useful to Tehran. It’s much easier and more helpful to peddle conspiracy theories.

In that context, it’s certainly reasonable to wonder if the recent attack by Iranian-backed militias in Iraq against U.S. and British soldiers was a staged reaction to divert the Iranian public’s attention away from the real cause of the high COVID-19 infection rate.

Was the attack meant to reframe the virus narrative as being the fault of the United States?

That’s unknown. But with tensions as high as they are in the region, it’s a high-risk move in any context.

It also tends to paint the Iranian government into a tight policy box: “What is the proper response,” average Iranians might ask themselves, “to a biowarfare attack on the government?”

Does Tehran have an answer to that question? Is it preparing the nation for a bigger response?

Although propaganda is, by definition, intended to misinform and control the public narrative in order to support the ruling regime, it is also provocatively dangerous. Inflammatory messaging, that is, telling a lie so big that it can’t be withdrawn, can drive regimes to engage in contrived acts of revenge to justify their lies and preserve their positions of power.

Escalation often follows, which can quickly lead all of us down a path that would be better for everyone if it were avoided.