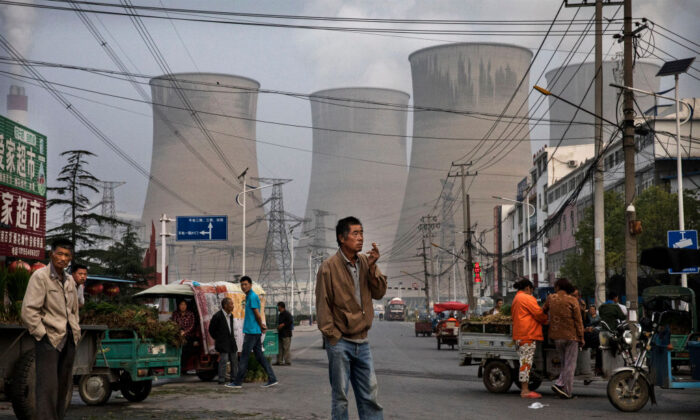 Outside a state-owned coal-fired power plant near the site of a large floating solar farm project on June 14, 2017 in Huainan, Anhui Province, China. The floating solar field is built on part of a former coal mine. The solar farm now produces enough energy to power 15,000 homes. Officials say they are planning more projects like it, in an area where long-term intensive coal mining has led to large areas of ground sinking and environmental degradation. China remains the planet's top emitter of greenhouse gases and accounts for about half of the world's total coal consumption. (Kevin Frayer/Getty Images)
China Business & Economy

After a two-week hiatus, the European Parliament finally passed the revised Carbon Border Adjustment Mechanism (CBAM). Consequently, China further loses its price advantage in exporting carbon-intensive products to Europe, a second blow to the country’s exports after 32 nations stopped preferential tariff treatment at the end of 2021.

CBAM aims at ensuring an equivalent carbon price for domestic and imported production on selected goods, and thereby encouraging the EU’s trading partners to reduce their carbon emissions.

CBAM will become the world’s first carbon tariff bill if the European Parliament and the Council of the European Union reach a final agreement in the ongoing negotiations. The UK is now following the EU’s lead, and the United States had previously urged the G7 countries to push forward with the new bill.

In fact, when the debate on CBAM was almost at a standstill at the European Parliament, China’s state-run media expressed joy and optimism, as the United States and Europe are China’s two largest export markets.

Trading data in 2020 showed that China’s total exports to Europe even surpassed that of the United States that year.

The amended version of CBAM expanded the scope to cover additional products. In addition to steel, cement, oil refining, organic chemicals, and fertilizers, targeted by the previous version, the new bill added plastics, hydrogen, and ammonia. Moreover, indirect emissions, such as those necessary to generate electricity for manufacturing, are also included.

All these measures paint a grim picture for China’s exporting sector.

As the world’s factory, China accounted for 30 percent of the global manufacturing output in 2021. Most of its exports are energy-intensive products with high carbon emissions and high energy consumption, making them the main targets of CBAM. The bill covered several major industries in China, such as cement, steel, plastics, and fertilizers.

Based on the initial version of CBAM proposed on July 14 last year, which covered steel, cement, aluminum, fertilizer, and electricity, carbon tariffs could affect 275.7 billion Yuan (about $41.21 billion) worth of China’s exports to Europe, which comprise 12 percent of China’s total exports to Europe. If China’s steel and aluminum industries pay 2 billion to 2.8 billion yuan (about $300 million to $420 million) of carbon tariffs each year, it would increase the cost of steel by $97.5 to $103.1 per ton, and increase the cost of aluminum by $642 to $733.8 per ton, according to a 2021 report by China’s Innovative Green Development Program (iGDP).

In the first five months of this year, China’s exports to the EU totaled $226.84 billion, a year-on-year increase of 17.4 percent; of which, organic chemicals covered by CBAM totaled $9.19 billion; chemical industry and related industrial products $18.17 billion; steel and steel products $2.71 billion and $5.48 billion respectively, and aluminum and aluminum products with high carbon emissions totaled $2.69 billion, according to the latest data from China’s General Administration of Customs of China.

Unite “Belt and Road” Countries to Counter US and Europe: CCP Experts

In response to the EU’s carbon tariffs, Lin Boqiang, director of the China Energy Policy Research Institute of Xiamen University, published a column on May 28, saying that once the EU carbon tariffs are implemented, it will bring additional costs to China’s exports to Europe, especially energy-intensive products, weakening China’s competitiveness in all related industries. Developed countries such as the United States and Europe will continue to introduce similar policies, forming “green trade barriers” for China’s export industries, he said.

China’s iGDP also warned in its report that CBAM will not be China’s only green trade threshold, implying that more trade restrictions are on the way.

Lin suggested that the Chinese authorities should strengthen negotiations with developed countries such as the United States and Europe, and “emphasize China’s position as a developing country.”

Previously, the CCP took advantage of “common but differentiated responsibilities (CBDR),” a principle formulated by the UN to address climate change, to give itself more time to reach carbon neutrality. CBDR stipulates that all states are responsible for addressing global environmental destruction yet not equally responsible.

However, in November last year, almost all developed countries, including the 27 EU countries, abolished China’s GSP trade benefits as a developing country.

In response, Lin suggested that the Chinese authorities “use diplomatic means to solve the climate problem” and unite countries along the “Belt and Road” and other developing countries such as “BRICS” to jointly counter the “pressure exerted by developed countries.”

CBAM will be implemented on Jan 1, 2023, with a transition period that runs to the end of 2026. The official levy will be imposed in 2027, one year later than the original version.