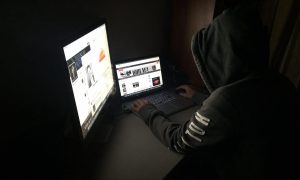 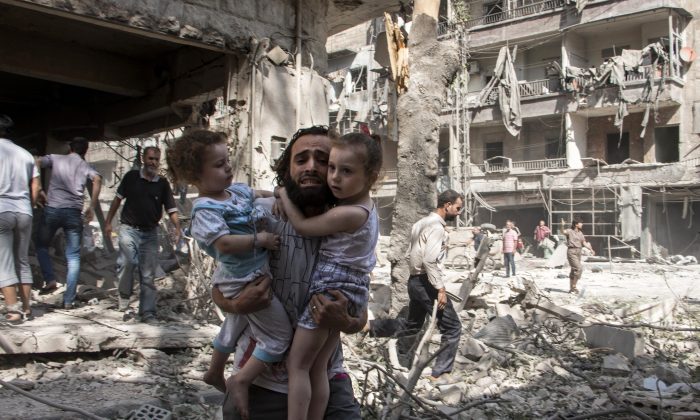 A Syrian man carries his two girls as he walks across the rubble following a barrel bomb attack on the rebel-held neighborhood of al-Kalasa in the northern Syrian city of Aleppo on Sept. 17. The Chinese regime is supplying weapons to the Assad regime, through Iran. (Karam al-Masri/AFP/Getty Images)
China

While Russia has been forthright about its military support for the the Syrian government, the Chinese regime is offering similar support, but from the shadows.

China’s supply of weapons to the Syrian government is not sent directly.

Instead, the weapons are going through Iran, which alongside Russia is a primary supplier of weapons to the Assad regime.

The Chinese regime supplies 31.7 percent of arms to Iran, despite sanctions, according to The Diplomat. These shipments consist mainly of air defense systems and missiles, including its HongQi-7 surface-to-air missile (SAM) systems and Crotale R440 SAMs.

After receiving these weapons from the Chinese regime, The Diplomat reports, Iran is in turn sending a large portion of these weapons to the Assad regime, where they’re being used to crush the Syrian opposition.

The effects of these weapons are already being felt on the ground. Rami Abdulrahman, director of the Syrian Observatory for Human Rights, told Reuters that the Syrian military recently started using new weapons that fit the description of those provided by Russia and China.

“There are modern weapons that the regime didn’t previously have, be they rocket launchers or air to ground to missiles,” Abdulrahman said.

An unnamed source also told Reuters, “The weapons are highly effective and very accurate, and hit targets precisely. We can say they are all types of weapons, be it air or ground.”

The Chinese regime supplies 31.7 percent of arms to Iran, despite sanctions, according to The Diplomat.

Business Insider reported in April that Chinese weapons are also being used by the terrorist organization ISIS, which many Arab groups believe is aligned with—or at the very least not being targeted by—the Assad regime.

ISIS in Iraq and Syria is using man-portable air defense systems (MANPADS) from China or Russia, which Business Insider said “were likely supplied by the Assad regime.”

It also notes that Russian, Iranian, and Chinese ammunitions “flooding the battle zones were likely looted by ISIS and other jihadists from Syrian military bases.”

Taking place behind the scenes is an effort by the Chinese Communist Party (CCP) and Russia to prevent the Syrian government from falling—and these efforts have in turn allowed the Syrian civil war, which has killed an estimated 200,000 people, to drag on for more than four years.

For the CCP, the real conflict began on Dec. 17, 2010, with the start of the Arab Spring revolutions when people began rising up against their governments and calling for democracy.

Soon after the protests started, a similar movement started in China in 2011, under the Jasmine Revolution, named after the same revolution in Tunisia.

Russia faced a similar issue in 2011, with protests following its elections.

Fearing these movements, it was also in 2011 that both countries blocked a 2011 resolution in the United Nations to legitimize the Arab Spring Revolutions.

Soon after, when the Arab Spring had spread to Syria, in 2012 both Russia and the CCP vetoed a draft resolution in the United Nations that called for Syrian President Bashar al-Assad to step down.

The Arab Spring likewise stopped in Syria, and since 2012—while other nations have supported the opposition movements—the CCP and Russia have taken actions to prevent the fall of the Assad regime.

This also highlights the hypocrisy of Chinese state media, which has recently been trumpeting the Party line that the United States is responsible for the Syrian refugee crisis.

While the United States does share some of the blame for the rise of ISIS, the majority are fleeing violence caused by Assad. The Diplomat reports that from January to July, Assad’s forces killed 7,894 people, which is close to seven times more than those killed by ISIS.

This implies, it states, “that the Syrian refugee crisis isn’t being caused by the Islamic State [ISIS] but by Assad’s bloody attempt to stay in power. Yet, unfazed by this bloodshed, China’s shop door remains open.”