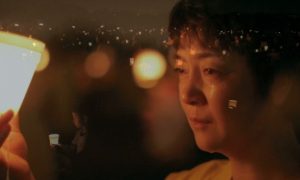 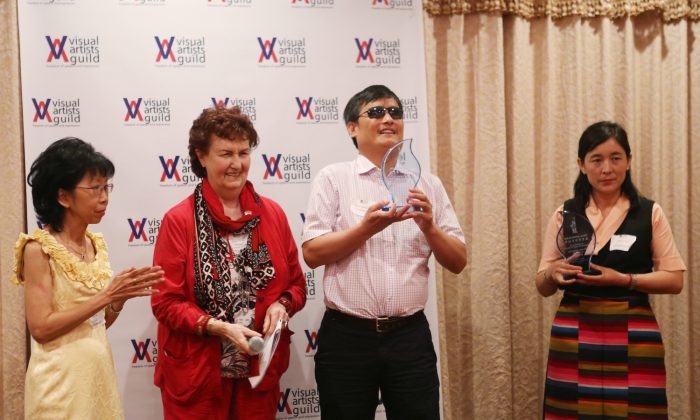 NEW YORK—Every year the Visual Artist Guild of New York City commemorates the June 4 Tiananmen Square massacre to remember the victims, to celebrate their calls for democracy, and their courage.

They gave their annual Freedom of Speech Awards to the Chinese human rights lawyer Chen Guangcheng; the Tibetan documentary filmmaker Dhondup Wangchen; and to three members of the Broadcasting Board of Governors, Victor Ashe, Susan McCue, and Michael Meehan in Chinatown last Saturday.

The Visual Artist Guild also awarded Chen Guangcheng last year. This year, he was able to receive his award in person. Guangcheng is a blind self-taught lawyer known for having defended thousands of women who were forced to have sterilizations or abortions in Linyi, Shandong Province. He made headlines last year after escaping house arrest to the U.S. Embassy in Beijing. He continues to speak out against human rights abuses committed by Chinese authorities.

Since living in the United States, Guangcheng has met with members of Congress, participated in events for think tanks and human rights organizations, and visited the European Parliament.

He urges Western governments to take on a tougher stance toward Chinese authorities and to condemn human rights violations.

“People in China are quickly awakening, while people abroad are reflecting on whether the kind of human rights policies or human rights cases in the past two decades have been a good choice,” Chen said in his acceptance speech.

The Tibetan documentary filmmaker Dhondup Wangchen is currently imprisoned in China. He was sentenced to six years in prison after being arrested in March 2008.

Wangchen’s documentary film “Leaving Fear Behind,” shows Tibetans talking about the Dalai Lama, the oppression under the Chinese Communist regime, the Beijing Olympics, and the migration of Han Chinese to the Tibetan region.

Wangchen’s wife, Lhamo Tso received the award of his behalf.

Talking about her husband she said, “With his small camera, Dhondup told a story. By truthfully sharing our sorrows of China’s occupation and our hopes for freedom, he touched many hearts. I am especially gratified that the man I love is among your honorees tonight; your award is a compassionate expression of people’s ability to care about other people, and contributes to Tibetan–Chinese reconciliation.”

Lhamo Tso has been calling on the U.S. government and European Parliament members to help release her husband.

“In Tibet, evidence has shown that political prisoners are granted sudden release when the Chinese authorities try to avoid custodial death in prison and take the blame. I urge you to help me to bring the father of my children back, alive” Lhamo Tso said.

Lhamo Tso has received support from Amnesty International and from some governments, but has yet to receive any response from Chinese authorities.

The three Broadcasting Board of Governors’ members, Victor Ashe, Susan McCue and Michael Meehan are presidential appointees in charge of U.S. international broadcasting. The Visual Artist Guild awarded them for preventing proposed cuts in Voice of America and Radio Free Asia broadcasts to Tibet and China. They also initiated management reforms to support human rights programs and journalists covering human rights issues in countries where freedom of the press is suppressed.

The producer of an award-winning documentary, Kean Wong congratulated the awardees. His film “Free China: The Courage to Believe,” exposes genocide and unfair trade practices with the West and highlights how new Internet technologies are helping to strengthen the free flow of information. “Free China: The Courage to Believe,” starts showing on June 7 at the Quad Cinema in New York City.