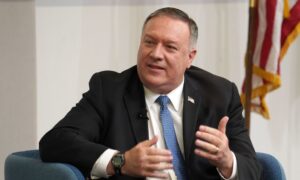 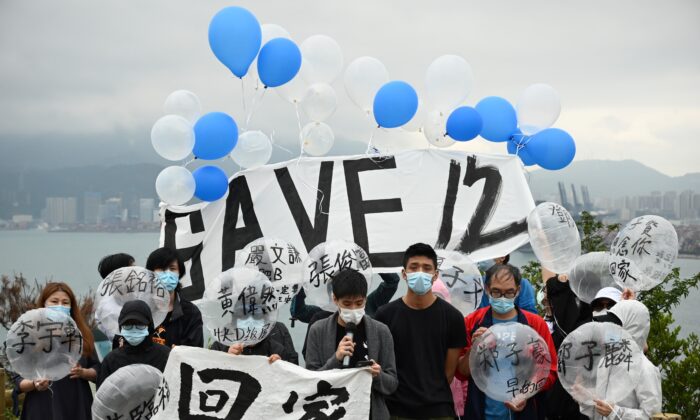 Four families and members of the Save12HKers campaign group prepare to fly balloons towards Yantian, in mainland China (back) at Crooked Island, in Hong Kong, on Nov. 21, 2020. (Peter Parks/AFP via Getty Images)
HK Current Affairs

Chinese authorities formally announced charges against Hong Kong detainees more than three months after they were first arrested while reportedly fleeing to Taiwan for political asylum.

Two were charged with organizing illegal border crossings while eight others were accused of taking part in a border crossing operation, according to a Dec. 16 statement from the Yantian District People’s Court in Shenzhen city, mainland China, where the activists are being held.

The court said it will hold closed-door trials to decide on the remaining cases for the two juveniles.

Unlawful border crossing is punishable by up to one year in prison under Chinese law. Organizers of such attempts could face two to seven years, and, in some “especially serious” cases, life imprisonment.

The 12 activists, aged from 16 to 33, were captured by Chinese coast guards in August as they set out on a boat to the self-ruled island of Taiwan.

All were previously arrested in Hong Kong for their involvement in the pro-democracy movement, which was borne out of discontent last summer over Beijing’s growing encroachment of the city’s autonomy. Hong Kong security chief John Lee said previously that 11 of them had been barred from leaving Hong Kong due to the charges.

At least one of them, Andy Li, was previously arrested for “colluding with foreign forces” under the new national security law, which the Chinese regime imposed on the city late on June 30. The new law punishes vaguely defined crimes such as secession and collusion with the maximum penalty of life imprisonment.

A Chinese foreign ministry spokesperson has previously labeled the 12 activists as separatists, and state-run Chinese media, such as Global Times, have consistently portrayed them as rioters. In October, Hong Kong police arrested nine people for assisting with their escape.

While the Shenzhen court did not specify the hearing dates, Hong Kong pro-democracy lawyer Hang Tung Chow suspects that Chinese authorities might convene the trial over the holiday season to minimize its international impact, given their past record of handling sensitive political cases in the past, she told Apple Daily.

Family members have been unable to contact the detainees, while the Chinese lawyers the relatives hired were unable to meet with their clients. Multiple lawyers have described being threatened by Chinese police to pull out of the case.

“Even though I felt a lot of pressure, I didn’t agree to quit, and they [authorities] wouldn’t accept the terms I offered. Soon, the judicial bureau sent out words that they would punish me and revoke my attorney license,” one of the lawyers told The Epoch Times in November. He said that the Yantian detention center had repeatedly denied access to him and other family-appointed lawyers. Police also followed him and called to inquire about his whereabouts, he said.

The government-appointed lawyers only started contacting the relatives in recent weeks, according to former Hong Kong legislator Eddie Chu, who has maintained contact with the arrestees’ families. He told local public broadcaster RTHK in a recent program that the government lawyers have acted mysteriously and refused to reveal their full names, adding that he hoped Chinese authorities would allow the relatives to attend the court hearings.

The Chinese regime’s arrest of the 12 Hongkongers, several of whom are foreign passport holders, has caught international attention. On Dec. 1, marking 100 days of their detention, 155 officials from 18 countries sent an open letter to Hong Kong Chief Executive Carrie Lam, urging her to ensure the Hongkongers’ “basic decency and human rights,” including their return to Hong Kong, access to needed medication, contact with family, and legal representation.

In the wake of the national security law, numerous pro-democracy activists have been arrested and a growing number of locals are seeking refuge elsewhere.

The U.S. House of Representatives passed a bill that would grant temporary protected status to those from Hong Kong who fear prosecution if they return. A similar bill was introduced in the Senate, but has not yet been brought to a vote.

“I fear that Hong Kong is becoming just another Chinese-run communist city, and that’s too bad,” Pompeo said in a media interview, calling the arrest another example of Beijing breaking its “50-year commitment”—its promise not to interfere with the city’s autonomy and basic freedoms upon transfer from British to Chinese rule in 1997.