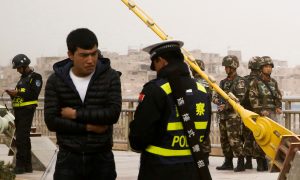 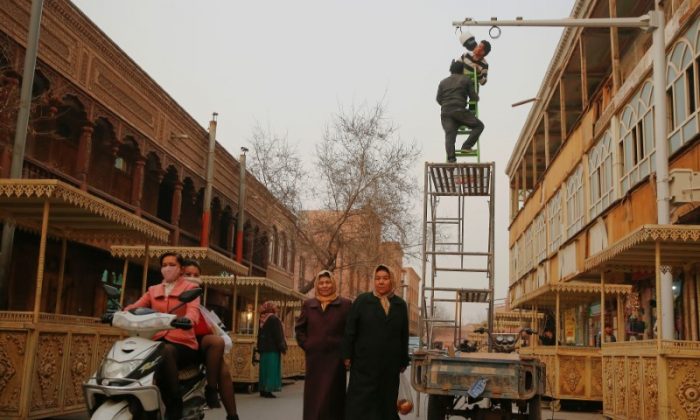 Men install a CCTV camera in a shopping street in the old town of Kashgar, in the Xinjiang region of China on March 23, 2017. (Reuters/Thomas Peter)
China Human Rights

Uyghurs are a Turkic ethnic minority, the majority of whom practice Islam and reside in the northwestern region of China known as Xinjiang. They don’t traditionally celebrate the Lunar New Year, and consumption of pork and alcohol is strictly forbidden in Islam.

Chinese authorities have, in recent years, stepped up persecution of the minority group, including rounding up Uyghurs and placing them in detention facilities, where they undergo political indoctrination and are forced to denounce their faith. The United Nations estimates that there are about 1 million Uyghur and other Muslim minorities detained in these so-called “vocational re-education centers.”

Former detainees have recounted human-rights abuses inside the facilities, such as torture, drugging, and rape.

Local officials in the prefecture of Ili Kazakh in Xinjiang invited residents to a Lunar New Year dinner where pork was served, and threatened to send the invitees to the “re-education centers” if they refused, according to a Feb. 6 RFA report.

Another resident told RFA that attempts to force Muslims to eat pork began in late 2018.

Officials have been sticking Lunar New Year poetic couplets on the doors of Uyghur and Kazakh households and giving them pork, according to a woman by the name of Kesay who belongs to the Kazakh minority.

“If we won’t put up the couplets or hang lanterns, they say we are two-faced, and they send us to re-education camps,” she said.

Dilxat Raxit, spokesman for the World Uyghur Congress, an organization for Uyghurs in exile, told RFA he had received similar reports regarding Uyghur households.

“According to our information, the Chinese government is stepping up its campaign to assimilate Uyghurs into Han Chinese culture,” he said. Han Chinese are the majority ethnic group in China.

Amid international criticism of the “re-education centers,” Shohrat Zakir, the Communist Party chairman of the Xinjiang region, made similar justifications for their existence.

“We are teaching the national common language, law, and regulations to aware them about the country and world as well as their legal rights, obligations, and duties,” Zakir told a small group of foreign journalists who were given a tour of facilities in southern Xinjiang in early January.

He further claimed that the centers were constructed to transform and educate those the Chinese Communist Party deems at risk of the “three evil forces” of “extremism, separatism, and terrorism.”