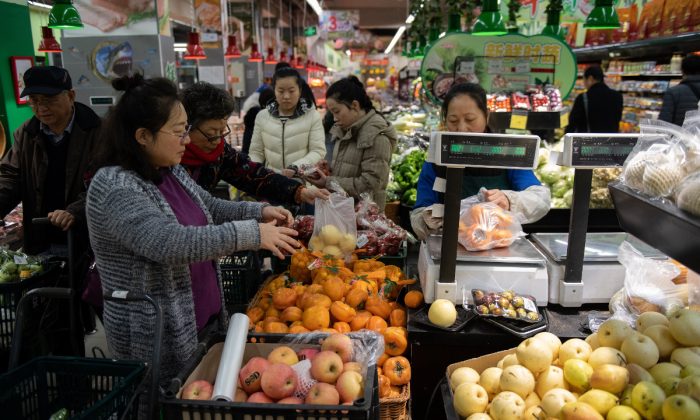 China’s decade long success in holding back food inflation may have come to an end due to a combination of African swine fever, armyworms, extreme flooding, and heat waves.

Since China must feed over one-fifth of the world’s population with only one-fifteenth of the world’s arable land, managing food security during periods of extreme weather and natural disasters historically has played a crucial role in retaining a mandate to rule. When it came to power in 1949, the Chinese Communist Party (CCP) promised that “not one person would starve to death,” but the ‘Great Leap Famine’ of 1958–1962 that killed 30 million remains one of the most lethal famines in both Chinese and world history.

Since the 1980s, China’s economic reforms expanded agricultural production and urbanized about a third of farmers. Other than a 5.7 percent food inflation scare during the 2008 Global Financial Crisis, the communist authorities have succeeded in keeping the closely watched China Agricultural Product Price Index flat over the last decade.

But inflation is about to puncture through the Chinese communists’ rigidly enforced one percent inflation ceiling due to a combination of extreme floods in the south and heat in the north; African swine fever slaughtering millions of pigs in 32 provinces, and fall armyworms voraciously munching across 19 corn-producing provinces.

China summers usually mean droughts in the north and mild floods in the south. But the Emergency Ministry reported that northern regions suffered elevated drought conditions this year, while the heaviest rains since 1961 struck China south of the Yellow River.

The Ministry reported on July 11 that this year’s summer floods impacted 19.91 million people, collapsed at least 34,000 homes and damaged 4.34 million acres of crops. Flooding has killed at least 61, forced 1.3 million people to be relocated, and left 582,000 people still in need of emergency aid. Water saturated soil also caused landslides in Guizhou on July 24 that killed another 14, and have left 48 missing.

The Chinese wheat, rapeseed, corn, cotton and soybean harvests are usually over by mid-August. The Chinese show gratitude to their gods for the bounty by celebrating Mid-Autumn Harvest Moon Festival, which is scheduled for September 13 this year. But flooded farmland threatens huge production losses this year.

China’s National Meteorological Center is forecasting heavy rains over the north, east and southwest this week. The moisture will bring some relief to the Beijing and Tianjin after a multi-week heatwave that pushed temperatures up to 35-40 degrees Celsius (95-104 degrees Fahrenheit).

It is hoped that with temperatures climbing to the second-highest in China’s four-tier system, a dry spell for water drenched areas south of the Yangtze River may allow farmers to save some of their crops.

With U.S. Trade representative Robert Lighthizer and Treasury Secretary Steven Mnuchin set to begin negotiations with Vice-Premier Liu He on July 30 and July 31 in Shanghai, state media trumpeted that China’s purchases of agricultural products from the United States are part of “unremitting efforts to show goodwill.”

But with U.S. soybean prices down by about 18 percent and corn prices are down about 12 percent since the Sino-U.S. trade war began in mid-2018, the Chinese negotiators facing a production disaster and spiking food inflation may be ready to buy huge amounts of U.S. crops.