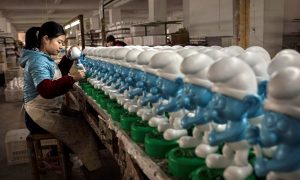 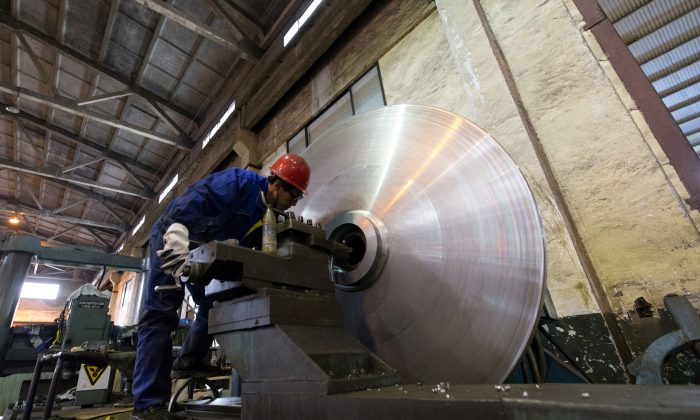 A man works at a workshop of a machinery manufacturing company in Nanjing, Jiangsu Province, China on Dec. 7, 2018. (Reuters)
China Business & Economy

BEIJING—Factory activity in China contracted to a three-year low in February as export orders fell at the fastest pace since the global financial crisis, highlighting deepening cracks in an economy facing weak demand at home and abroad.

The gloomy findings are likely to reinforce views that the world’s second-largest economy is still losing steam, after growth last year cooled to a near 30-year low.

Even with increasing government stimulus to spur activity, concerns are growing that China may be at risk of a sharper slowdown if current Sino-U.S. trade talks fail to relieve some of the pressure.

The official Purchasing Managers’ Index (PMI) fell to 49.2 in February from 49.5 in January, pointing to a contraction in activity for the third straight month, according to data released by the National Bureau of Statistics (NBS) on Feb. 28. The 50-mark separates growth from contraction on a monthly basis.

Analysts surveyed by Reuters had forecast the manufacturing gauge would stay unchanged from January’s 49.5. China’s factory activity has been generally softening since last May.

“Unless the trade war truly turns into an extended truce, the weakening trend may not end quickly,” Iris Pang, Greater China economist at ING, said in a note. “As such we expect March’s PMI to fall, too.”

Manufacturing output contracted in February for the first time since January 2009, during the depths of the global crisis. A breakdown of the survey’s findings showed the output sub-index fell to 49.5 from 50.9 the previous month.

Manufacturers continued to cut jobs more aggressively, a trend Beijing is closely watching as its weighs more support measures. The pace of job-shedding was the fastest since December 2015.

New export orders shrank for a ninth straight month, and at a sharper rate, in the latest sign of deteriorating global demand. The sub-index fell to 45.2, the lowest since February 2009, from 46.9 in January.

But total new orders—an indicator of future activity—edged back into expansionary territory, suggesting some improvement in domestic demand. The sub-index rose to 50.6 from 49.6 in January, after falling for two consecutive months.

China watchers typically advise caution over interpreting the country’s economic data early in the year because of the timing of the week-long Lunar New Year holidays.

Many firms scale back operations or close for long periods around the holidays, which began on Feb. 4 this year. But workers, business owners, and labor activists have told Reuters that companies have shut earlier than usual as the trade war bites, with some likely to close for good.

Ford Motor Co.’s joint venture in China has quietly begun dismissing thousands of its workers due to weak auto sales in the world’s second-largest economy, the New York Times reported on Wednesday.

Record lending by Chinese banks in January and a sharp rebound in its stock markets have lifted some of the gloom hanging over the economy.

But analysts say it will take months to see if the strong credit impulse translates into improved business activity, assuming companies are borrowing for fresh expansion or investment, not merely refinancing existing debt.

In a sign of the wider impact China’s shrinking demand is having globally, factory output in Japan, the world’s third-largest economy, posted its biggest decline in a year in January, data showed on Thursday. That followed data out last week that showed Japan’s exports logged their worst drop in more than two years as China-bound shipments tumbled.

The PMI survey also showed smaller firms were still bearing the brunt of the pressure in February while large firms – many of them state-owned enterprises – stayed afloat, despite targeted policy measures to help struggling private firms refinance and increase capacity.

Some economists believe China’s economic growth could even dip below 6 percent in the first half — from 6.4 percent in the fourth quarter — before stabilizing later in the year as a series of support measures in 2018 and 2019 begin to take effect.

“The cooling property sector, the end of the durable goods replacement cycle and the payback effect from the previous front-loading of exports have been and will remain headwinds,” Ting Lu, chief China economist at Nomura, wrote in a note.

Exports are likely to remain under pressure even if current China-U.S. trade talks result in a deal, as demand is weakening globally, analysts say.

President Donald Trump said on Monday that he may soon sign a deal with Chinese leader Xi Jinping to end the countries’ trade war, if the two sides can bridge remaining differences

But the lead U.S. negotiator said on Wednesday it was too early to predict the outcome.

U.S. issues with China are “too serious” to be resolved with promises from Beijing to purchase more U.S. goods and any agreement must include a way to ensure commitments are met, U.S. Trade Representative Robert Lighthizer said.

Growth in China’s services industry also cooled in February after rebounding for two straight months as new orders rose at a slower pace, another sign of strain as consumers turn more cautious about spending.

Services growth was mainly dragged by a notable slowdown in construction activity, suggesting recent fiscal stimulus through more bond issuance is not fully flowing through yet to infrastructure investment. The sub-index fell near 2 percentage points to 59.2 in February.