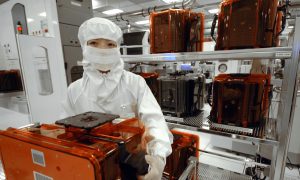 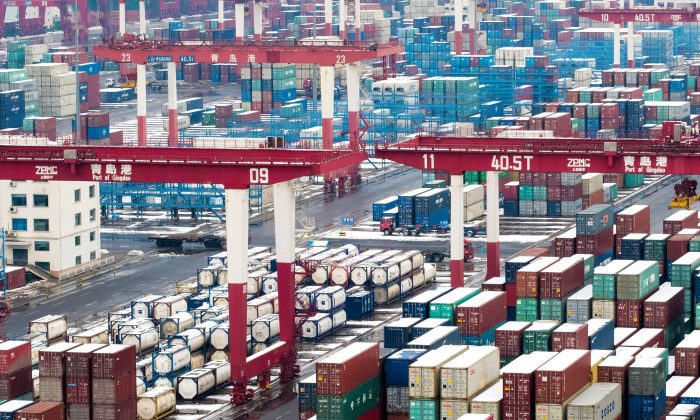 Containers and trucks are seen following a snowfall at the port of Qingdao, Shandong Province, China on Feb. 14, 2019. (Reuters)
China Business & Economy

China February Exports Tumble the Most in 3 Years, Spurring Fears of ‘Trade Recession’

BEIJING—China’s exports tumbled the most in three years in February while imports fell for a third straight month, pointing to a further slowdown in the economy and stirring talk of a “trade recession,” despite a spate of support measures.

While seasonal factors may have been at play, the shockingly weak readings from the world’s largest trading nation added to worries about a global slowdown, a day after the European Central Bank slashed growth forecasts for the region.

Asian stock markets and U.S. futures extended losses after the data. Chinese stocks sank over 4 percent in their worst day in five months.

Global investors and China’s major trading partners are closely watching Beijing’s policy reactions as economic growth cools from last year’s 28-year low. But the government has vowed it will not resort to massive stimulus like in the past, which helped revive demand worldwide.

Imports fell 5.2 percent from a year earlier, worse than analysts’ forecasts for a 1.4 percent fall and widening from January’s 1.5 percent drop. Imports of major commodities fell across the board.

That left the country with a trade surplus of $4.12 billion for the month, much smaller than forecasts of $26.38 billion.

Analysts warn that data from China in the first two months of the year should be read with caution due to business disruptions caused by the long Lunar New Year holidays, which came in mid-February in 2018 but started on Feb. 4 this year.

But many China watchers had expected a weak start to the year as factory surveys showed dwindling domestic and export orders and the Sino-U.S. trade war dragged on.

“Seasonal distortions around the Chinese New Year holiday has added noise to the export data in the past two months, and in our view explain most of the surprise (relative to consensus),” said analysts at Goldman Sachs, whose estimate for a 20 percent export drop was the most pessimistic in the Reuters poll.

But they noted that export momentum on a three-month basis has moderated significantly since the third quarter last year and said “growth is likely to remain soft in the near future.”

The increasingly weak China data comes amid months of intense negotiations between Washington and Beijing aimed at ending their trade dispute.

On March 6, the U.S. reported its goods trade deficit with China surged to an all-time high last year, underlining one of the key sticking points.

China’s data on March 8 showed its surplus with the United States narrowed to $14.72 billion in February from $27.3 billion in January, and it has promised to buy more U.S. goods such as agricultural products as part of the trade discussions.

U.S President Donald Trump said March 6 that trade talks were moving along well and predicted either a “good deal” or no deal between the world’s two largest economies.

Trump postponed a sharp U.S. tariff hike slated for early March as the talks progressed, but both Washington and Beijing have kept previous duties in place.

The Chinese regime’s top diplomat, State Councillor Wang Yi, said March 8 that talks had made substantive progress, and that the two countries’ relations should not descend into confrontation.

But the New York Times reported that Chinese officials are leery of continued discussions and don’t want to commit China to structural changes in its economy.

China’s economy was already slowing last year before trade tensions escalated, due in part to a regulatory clampdown on riskier lending that starved smaller, private companies of financing and stifled investment.

Even if a trade deal is reached, its exporters will have to contend with weakening demand globally, particularly in Europe. China’s exports to all of its major markets fell across the board last month.

The Chinese government is targeting economic growth of 6.0 to 6.5 percent in 2019, Premier Li Keqiang said at the March 5 opening of the annual meeting of parliament, a lower target than set for 2018.

Actual growth last year slowed to 6.6 percent, and is expected to cool further to 6.2 percent this year. Many analysts expect a rocky first half before a flurry of stimulus measures start to stabilize activity around mid-year.

China’s slowdown and the trade war are having an increasing impact on other trade-reliant countries and businesses worldwide.

On Thursday, automotive chipmaker Renesas Electronics Corp said it plans to halt production at six plants in Japan for up to two months this year as it braces for a further slowdown in Chinese demand.

Taiwan reported its biggest export drop in over 2-1/2 years on March 8, with shipments to China down 10.4 percent. Like China, Japan and South Korea, its high-tech manufacturers are also being hurt by a global downturn in demand for electronics from memory chips to smartphones.