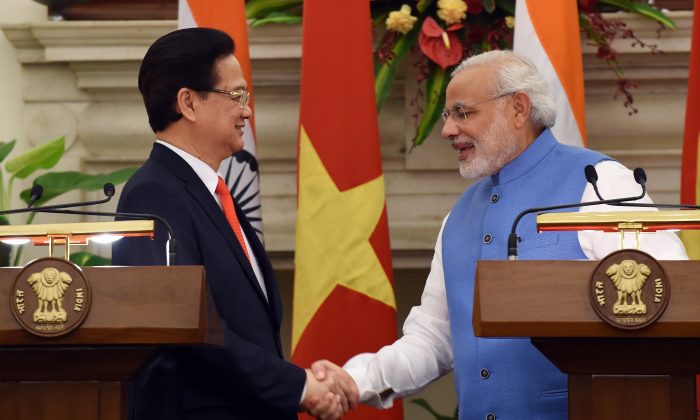 NEW DELHI—The Indian government is making efforts to increase cooperation with Vietnam, a partnership that could rebalance the axis of power in Asia away from China.

China responded cautiously to the news, saying it did not have a problem with India’s oil exploration if it did not enter disputed regions between Vietnam and China. “But if such cooperation harms China’s sovereignty and interests, we are firmly opposed to that,” said Chinese Foreign Ministry spokesman, Hong Lei.

China, the largest country in the region, has been growing increasingly assertive in its territorial claims.

“The whole world is anxious about finding a strategic equalizer for China,” said Dr. Kodur Venkatesh, a Bangalore-based strategic affairs analyst. He says this is an opportune moment for India to partner with Vietnam because the small communist nation is looking for countries other than China to trade resources with.

Likewise, India is interested in Vietnam because it controls a large part of the South China Sea, where fertile fishing grounds, oil and natural gas fields have made it a prized commodity.

“It’s the South China Sea resources which has been primarily unexploited so far and Vietnam is one of the core countries which is the natural guardian there, natural protector of a substantial amount of the South China Sea,” said Jagannath P Panda, center coordinator for East Asia at the Institute for Defence Studies and Analyses in New Delhi.

Besides being interested in Vietnam for its oil and natural gas reserves, India sees Vietnam as a powerful military ally right next door to China.

“[Partnering with Vietnam] will be of greatest advantage to India,” said Venkatesh, saying that it will help to keep China’s power in check to have a large country like India backing a neighbor like Vietnam.

And India realizes this.

“Our defense cooperation with Vietnam is among our most important,” Indian Prime Minister Narendra Modi told reporters last Tuesday, adding it will be expanded in the future.

Last week, India promised to supply four naval patrol boats to Vietnam, which is the first military transfer to Hanoi under a $100 million line of credit. India is also pursuing a deal to supply Vietnam with BrahMos cruise missiles, a potential deterrent to Chinese vessels that have entered Vietnamese waters.

In May, China and Vietnam faced off after a Chinese oil rig entered waters that fall into Vietnam’s 200-nautical mile Exclusive Economic Zone near the Paracel islands. China has had control of the Paracel islands since the 1970’s, and claims that the oil rig was within its own waters.

Vietnam sent vessels to chase out the oil rig but were outsized by China’s fleet that was guarding the rig. China eventually removed the rig in July citing the onset of typhoon season, and said it was planning its next steps in the region after it analyzed data from tests done there.

According to Panda, Vietnam needs the support of a big regional power to balance out China, and wants India to take the lead on maritime governance, security, and freedom of navigation in the region.

On Sunday, there were reports of a Chinese nuclear submarine docking at a Sri Lankan port near the southern tip of India. Earlier in September, another nuclear submarine there coincided with the Indian president’s visit to Vietnam.

Panda also says China perceives the India-Vietnam relationship as a threat to its Maritime Silk Route (MSR), an initiative Chinese leader Xi Jinping proposed last year to forge economic partnerships with countries in the Asia-Pacific and on the Indian Ocean.

He said India and Vietnam realize the importance of the MSR to China.

“As far as China is concerned, I think in the last two decades India has followed a single point policy: engage with China economically, but when it comes to security and political issues, particularly sensitive foreign policy issues, engage with China cautiously,” said Panda.