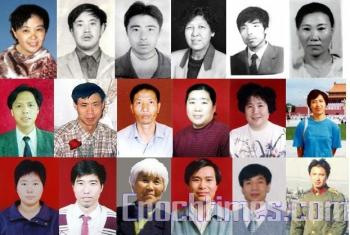 3296 Falun Gong practitioners have been killed as a result CCP's persecution in mainland China, according to Minghui.net, a Falun Gong Web site. Pictured are some of those killed in Daqing City, Heilongjiang Province. (The Epoch Times)
China

In China, Families of the Persecuted Speak Out

Family members of 56 Falun Gong practitioners in a jail in Heilongjiang Province, China, have published their complaint to the Chinese authorities online, demanding legal compensation and for perpetrators to be held responsible for alleged crimes.

On August 11 Minghui.net, a Falun Gong Web site, published the families’ complaint to the Chinese court system. The complainants are all direct family members of 56 Falun Gong practitioners detained in the Daqing Labor Camp in the northern province of Heilongjiang.

The letter takes a similar form to a previous one, lodged in 2006, after 1,061 family members of Falun Gong practitioners detained in Zhumalong Labor Camp, Hunan Province, wrote to international human rights organizations.

This time, in addition to having their complaints published on the Internet, the family members sent their complaint to the United Nations, several human rights groups concerned with the persecution of Falun Gong, and a number of Chinese Communist Party (CCP) organs, including the National People’s Congress and the Ministry of Justice.

The indictment states, in part: “Falun Gong practitioners have been persecuted by the CCP physically and spiritually. They have even lost their lives. At the same time, we family members and friends are all affected by this persecution. This is a destruction of human conscience and morality. We do not understand this persecution and we cannot endure it anymore.”

They go on to lay out the alleged torture experienced by 16 of their relatives who practice Falun Gong, and detail the alleged crimes committed in Daqing Prison, which are opposed to the basic rights offered in the Chinese constitution and Chinese criminal law, as well as the Universal Declaration of Human Rights, they argue.

One of the examples the families give is that of Zhu Hongbing, an employee of the 7th Gas Lift Factory of the Daqing Petroleum Administration Bureau. He was imprisoned for seven years, they say, where he was brutally tortured by police and prison guards. In September 2002, Zhu was beaten to the point where he had to be hospitalized, with one of his lungs ulcerated; a tube was then connected to drain the pus from his lung, and he fell into a coma for 24 days.

Later, In May 2005, police did not allow him to eat, sleep or use the restroom; and then, by way of force-feeding, poured diluted milk into his lungs, which caused serious ulcerations and eventually heart-failure.

Force-feeding is the leading cause of death of Falun Gong practitioners in custody, according to the Falun Dafa Information Center. Because guards are untrained and apparently do not care for the health of those in their custody, feeding tubes are often wrongly inserted into the lung rather than stomach.

When Zhu was released in 2008, after serving his term in prison, his lung capacity was severely reduced, and he passed away soon after, according to family members.

The families’ complaint demands a thorough investigation of the CCP’s alleged crimes, which include “slander, inciting ethnic hostility, anti-human crimes, killing members of a group, torture, and more,” they wrote.

Erping Zhang, a spokesperson for the Falun Dafa Information Center, elaborated on the families’ situation in a phone interview with The Epoch Times: “They have exhausted all legal means to seek justice and compensation, and had nowhere to go but file a formal complaint.”

In recent months Beijing has cracked down on human rights lawyers, using a variety of techniques, including denying licenses and closing down law offices. In some cases, lawyers have reportedly been kidnapped and beaten by unidentified assailants. Lawyers who attempt to defend Falun Gong practitioners face harsher retribution, such as in the case of Gao Zhisheng, who was kidnapped and tortured for 50 days in 2007, and who is currently being held incommunicado by the authorities.

“It’s extremely risky because in present-day China legal representation is usually not allowed on behalf of Falun Gong victims, and the government prohibits the defense from being ‘not-guilty’” Zhang said. “It’s very courageous of them.”

In 2003, Chen Zixiu, a 70-year-old Falun Gong practitioner was tortured to death by Chinese authorities, as documented in Ian Johnson’s Pulitzer prize winning articles. Her daughter, seeking justice for her mother’s case, was arrested and sentenced to three years forced labor.

Falun Gong is a spiritual practice based on truthfulness, compassion, forbearance, and includes five exercises. People who practice it have been persecuted in China since July 1999.