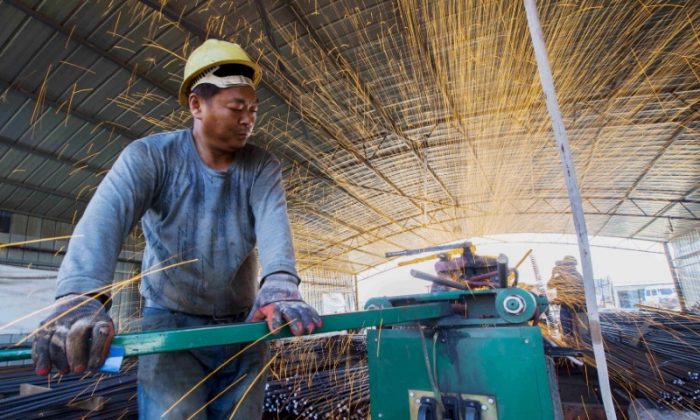 BEIJING—China’s manufacturing sector in October expanded at its weakest pace in over two years, hurt by slowing domestic and external demand, in a sign of deepening cracks in the economy from an intensifying trade war with the United States.

Anxiety about China’s cooling growth and its likely drag on the global economy have vexed financial markets recently, and the official Purchasing Managers’ Index (PMI) on Oct. 31 indicates more stress for investors through coming months.

The official PMI—which gives global investors their first look at business conditions in China at the start of the last quarter of the year—fell to 50.2 in October, the lowest since July 2016 and down from 50.8 in September.

It was a touch above the 50-point mark that separates growth from contraction for a 27th straight month, but undershot the 50.6 forecast in a Reuters poll.

The latest reading suggests a further loss of momentum in the world’s second-biggest economy, and the deteriorating environment for businesses could prompt more policy support from Beijing on top of a raft of recent initiatives.

“All the numbers from China’s PMI release today confirm a broad-based decline in economic activity,” said Raymond Yeung, chief economist for China at ANZ in a client note, adding that conditions for the private sector is “much worse” than headline data suggested.

“Besides an expected reserve requirement ratio (RRR) cut next January, we expect future supportive policy actions to be measured. The government’s priority is to avoid a financial blow-up.”

New export orders, an indicator of future activity, contracted for a fifth straight month and at the fastest pace in at least a year. The sub-index fell to 46.9 from 48.0 in September.

While China’s exports have been pretty resilient largely as firms front-loaded shipments to dodge stiffer U.S. duties, analysts see pressure building in coming months. The continued slump in export orders may be bearing that scenario out.

October is the first full month after the latest U.S. tariffs went into effect. Washington and Beijing slapped additional tariffs on each other’s goods on Sept. 24, and U.S. President Donald Trump has proposed to hit China with more duties.

If the United States follows through on its promise to increase its tariffs to 25 percent at the turn of the year, exporters will feel more pain.

“The 25 percent tariff rate will be activated in January…maybe the weakening of new export orders in the PMI is a warning sign of what’s to come even though it hasn’t been reflected yet in the hard data,” said Julian Evans-Pritchard, Senior China Economist at Capital Economics.

The China PMI survey also showed the production sub-index fell to 52 in October from 53.0 in September, while a new orders saw a sharp decline to 50.8 from 52.0, in a sign of much weaker domestic demand.

The statistics bureau attributed the slump in October’s manufacturing activity to the impact from a week-long national holiday and the challenging external environment.

More than 70 percent of U.S. firms operating in southern China are considering delaying further investment there and moving some or all of their manufacturing to other countries as the trade war bites into profits, a business survey showed on Monday.

China’s economy grew at its weakest pace since the global financial crisis in the third quarter, as manufacturing output and infrastructure investment slowed. Analysts believe business conditions will get worse before getting better.

Firms are already facing pressure on earnings. A survey over the weekend showed profit growth at the country’s industrial powerhouses cooled for the fifth consecutive month in September on the back of a greater slowdown in production and sales.

China’s manufacturing sector has been squeezed by a reduction in sources of credit amid Beijing’s multi-year crackdown on corporate debt and risky lending practices, with smaller firms especially under strain.

Policymakers have already shifted their priorities to reducing risks to growth. Earlier this month, China’s central bank announced the fourth reserve requirement ratio (RRR) cut for this year, and is expected to ease monetary policy further.

It is also stepping up moves to lower financing costs and pledged more support to private firms, a key source of jobs. On the fiscal side, the government is stepping up stimulus through infrastructure projects, and has also pledged more tax cuts next year to support growth.

Another sister survey released by the NBS on Wednesday showed that growth cooled in China’s vast services industry in October.

However, a sub-index of construction activity improved in an indication that the government’s infrastructure push may be taking hold, analysts say.

All the same, some economists believe Beijing might have to sharply boost stimulus soon.

“Beijing’s policy focus so far has been on containing a credit freeze,” Nomura analysts said.

“If our more cautious views prove to be valid, growth will likely slow to such a worrying pace in spring 2019 that Beijing may have to greatly ramp-up its easing/stimulus measures at that time.”