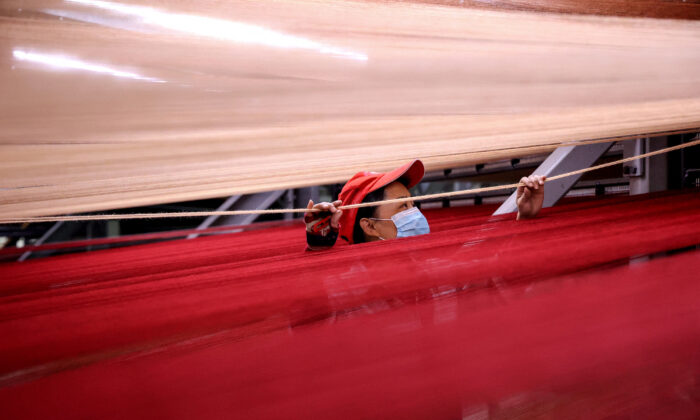 A worker produces carpets that will be exported at a factory in China's eastern Shandong Province on Oct. 20, 2021. (STR/AFP via Getty Images)
China Business & Economy

China’s factory activity picked up in November after two months of contraction, yet still the third lowest in about 20 months, despite the ease of mass power rationing and raw material price surges.

China’s manufacturing purchasing managers’ index (PMI) for November was 50.1, up from 49.2 in October—the first time it exceeded the 50 mark since September, data from the National Bureau of Statistics (NBS) show on Nov. 30.

The index tells the direction of economic trends in the manufacturing and service sectors. The 50-point mark separates expansion from contraction on a monthly basis in sector activity and a reading above 50 indicates growth—the higher the reading, the faster the growth pace is.

This month also saw an increase in work hours or productivity compared to October, when production slowed during the national “Golden Week” holiday. Moreover, China’s factory-gate inflation accelerated to a 26-year high last month, while producers found it hard to cover their costs with consumer demand remaining weak.

November marked the fourth straight month of decline in consumer demand, as new export orders contracted for the seventh month in a row.

China’s economy largely cooled down due to the strict pandemic lockdowns, supply shortages, regulatory crackdowns on various sectors, and environmental curbs. Now the impact of the Omicron variant on its manufacturing sector remains unknown.

In contrast to the rebound in the factory sector, growth in the services sector slowed slightly with the official non-manufacturing PMI in November slightly easing to 52.3 from 52.4 in October.

China’s official October composite PMI, which includes both manufacturing and services activities, stood at 52.2, up from October’s 50.8.

According to NBS, a subindex for production rose to 52.0 in November, up from 48.4 in October. The construction activity subindex rose to 59.1 in November, compared to 56.9 last month.