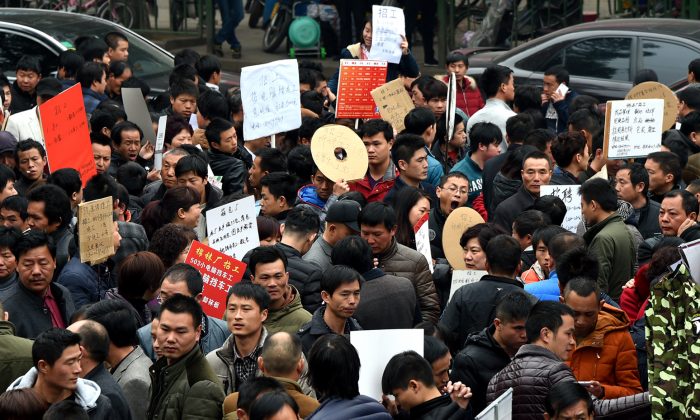 Youth employment has emerged as one of Beijing’s most pressing challenges—with more than 10 million fresh graduates expected to enter the labor market this year—given the ongoing economic slowdown, property sector slump, and other difficulties.

As a record 10.76 million new college graduates are set to enter the competitive job market this summer, China’s National Development and Reform Commission on Feb. 11 announced financial incentives to urge small companies to hire fresh graduates and to provide special support for young people to start a new business.

The ratio of graduates employed by companies fell to 32 percent in 2021, state media Guangming Daily reported, citing a survey of 34 universities across the country conducted by Peking University.

In addition, a survey conducted by Renmin University of China showed that 61 percent of companies employed “flexible workers” in 2021.

Not only do the data represent the fundamental changes occurring in China’s economy as a result of the emergence of the digital economy and platform economy, but they also reflect a more dire job market picture.

The report added that one out of every six new graduates became flexible workers in both 2020 and 2021.

In China, “flexible employment“ officially refers to several types of temporary workers, including delivery drivers, internet shop owners, housekeepers, and ride-hailing drivers, among others. However, some people believe the term is just another way of saying “unemployment.”

The Chinese unemployment rate among those aged 16 to 24 was 14.3 percent in December, according to the National Bureau of Statistics. Yet the rate for youth aged 20 to 24 was higher than 20 percent, said Li Yang, director-general of the Institute of Finance and Banking at the Chinese Academy of Social Sciences.

China’s GDP growth slowed to 4.0 percent year on year in the fourth quarter of 2021, as a COVID-19 resurgence and a real estate crisis, among other issues, combined to dampen economic momentum.

Bloomberg quoted data from Tianyancha, which tracks public registrations, and reported that about 4.4 million small businesses were deregistered in the first 11 months of 2021. That is more than three times the amount of new small and micro companies set up during the same time frame.

China’s small and medium-sized businesses accounted for over 80 percent of urban employment.

In 2020, more than 6 million small businesses were established, the data showed.

Competition for jobs has been exacerbated further by layoffs because of Beijing’s regulatory crackdowns on a range of sectors, including fintech, education and private tutoring, real estate, and high-emission factories—all of which have seen employment opportunities rapidly shrink.

For instance, one analysis showed that Beijing’s drive to tighten restrictions on the private tutoring business last year could imperil more than 3 million jobs, whether the workers are laid off, forced to change jobs, or transferred to other divisions.

Economists warned that China’s educated youth have no incentive to get married or raise a family due to uncertain job prospects; subsequently, the marriage age will be further postponed, while the birth rate will continue to fall. This is a troubling development for China’s economy.