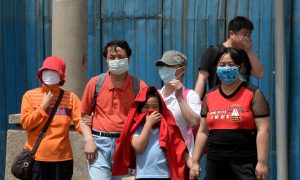 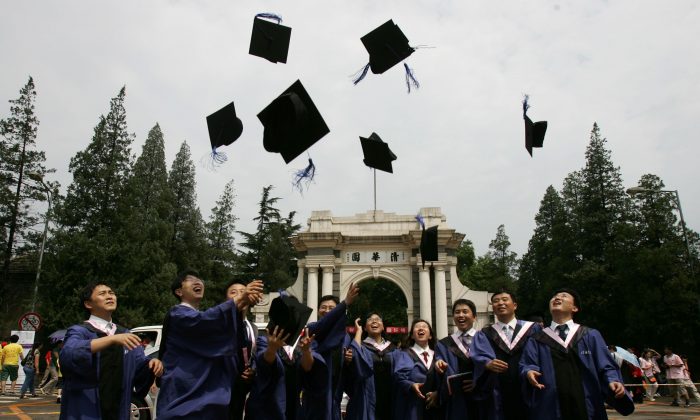 Students throw their mortar boards into the air as they graduate during a ceremony held at Tsinghua University on July 18, 2007 in Beijing. Large percentages of engineering graduates from Tsinghua, known as the "M.I.T. of China," have been emigrating to the United States, part of China's brain drain. (China Photos/Getty Images)
China

In recent years, China has not only suffered major capital outflows and an ever-rising number of emigrating entrepreneurs, but also a drain of its talented individuals. China’s loss of top talent is the highest in the world, and this could be due in part to widespread corruption and ongoing persecutions being carried out by the communist regime.

“China tops the world in terms of brain drain, particularly in the fields of science and engineering, where an estimated 87 percent of talented individuals choose to stay overseas,” said an official from mainland China’s Office of Central Talent Work Coordination Group.

The official stressed that China is still severely lacking in terms of the size, composition, and quality of its local talent pool, especially when compared to the country’s current economic and social needs, as well as the talent pools of other countries. Some key issues he listed were a lack of innovators and entrepreneurs, a highly disorganized talent pool, and difficulties in nurturing talented individuals within China due a lack of investment in talent development and other existing obstacles.

Prior to this, data from the China Development Report Study (2012) Blue Book showed that between 1978 and 2011, a total of 2,245,100 Chinese students travelled abroad to study, making China the world’s largest exporter of students in that time period. Yet only 818,400 students, making up 36.5 percent of the total, returned to China over the same time period.

According to the 2004 “Chinese Statistical Yearbook,” there are approximately 62,500 China-born PhD degree holders in the United States, but only 18,493 PhD degree holders in Chinese public research institutions, as of 2006. The Chinese Academy of Social Sciences also admitted in a 2007 report titled “Global Politics and Security” that the rate of China’s talent loss is worst in the world.

Since 1985, 80 percent of science and engineering graduates from Tsinghua University and 76 percent of those from Peking University have chosen to migrate to the United States, said Wang Yaohui, the director of China and Globalization Research Center, earlier this month. These numbers reflect the status quo of China’s brain drain.

However, China may also be losing talented individuals to corruption within its regime. A notable case is that of Tsinghua University professor Shi Yigong, who, despite his stellar academic credentials, was passed over for admission to the Chinese Academy of Sciences (CAS), the Chinese government institution that functions as the national scientific think-tank, in 2011.

In April this year however, Shi was elected as an honorary foreign member of the American Academy of Arts and Sciences, and a foreign associate member of the National Academy of Sciences in the U.S.

When Shi and another professor named Rao Yi, who was a former dean of Peking University’s School of Life Sciences, both failed the CAS member elections of 2011, the public began to question the academy’s selection procedures.

Rao later wrote a 4000-word-long blog post in Chinese titled “A dissection of the societal phenomenon of ‘internal elimination’, from a sparrow’s point of view,” which expressed grievance over Shi’s unsuccessful election bid.

In the article, Rao wrote that in the process of CAS member elections, academic achievements, age, academic seniority, and scientific contributions were all deemed less important than “how long one has bowed down in a line in front of some people.” Rao also announced that he would never submit his candidacy for CAS membership ever again.

China has also lost many talented individuals to the communist regime’s ongoing persecutions, chief among these being the persecution of Falun Gong. The case of Xu Yan, a former Tsinghua University professor, is one such example.

Xu, a Falun Gong practitioner, had taught at the Department of Civil Engineering in Tsinghua University for 13 years, where he won many accolades for his outstanding teaching and research. The fact that he was a practitioner was widely known amongst his students and colleagues, and he attributed his good performance at work to the positive benefits of the spiritual discipline.

When he was released two years later, Tsinghua University threatened to bar him from returning if he did not sign documents stating that he would never practice Falun Gong again, so Xu gave up his position at the university. He left for the United States with his family, where he was warmly received and has remained ever since.

“I loved my job, my students, and my family. I didn’t want to abandon the land that raised me; I did not want to leave the classrooms and give up my students. But when my own government persecuted me for my beliefs, I had to set an example for my students. I had to tell the facts of the persecution and expose the CCP’s evil deeds,” said Xu in a written statement.