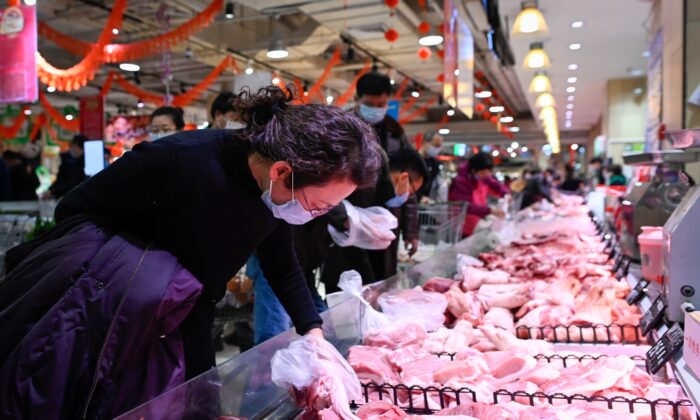 A woman selects pork at a supermarket in Beijing on Feb. 10, 2021. (WANG ZHAO/AFP via Getty Images)
Thinking About China

Inflation is about to hit China at a very inopportune time.

Inflation and specters of a U.S. Federal Reserve interest rate increase could present a double whammy on China’s economy as it struggles to come out of COVID-19 lockdowns.

Official National Bureau of Statistics (NBS) data showed Chinese factory-gate prices, or the cost at which wholesalers purchase from factories, increased 13.5 percent in October compared to a year ago. That’s the fastest rise in China’s producer price index (PPI) since 1996. The index tracks purely the price of goods at “factory gates” and doesn’t include transportation or logistics costs, which also are rising.

The alarming figure was the result of a rise in other input prices, including that of coal, oil, steel, and electricity. Factory-gate inflation may have been exacerbated by an unexpected energy crunch over the past few months. In October, the Chinese Communist Party (CCP) ordered its mining companies to increase coal production and forced price cuts to lower energy costs.

That shouldn’t be a surprise to U.S. consumers already suffering from inflation. October consumer price index (CPI) in the United States rose 6.2 percent from 2020, the fastest year-over-year surge in 31 years.

Chinese CPI was 1.5 percent higher in October. That’s the official figure, and we can be sure the CCP is closely managing these numbers. Runaway prices, especially on necessities such as food, are a sensitive topic for social stability. The official figures report that the nationwide cost of fresh vegetables jumped 16.6 percent in October, a huge red flag.

Stagflation is an economic state in which a country’s economy suffers from stagnant economic growth and rising inflation at the same time. It’s especially tricky as the central bank can’t use its usual tool of raising interest rates to combat inflation without harming economic activity. The United States experienced this during the 1970s when an economic recession was met with an oil supply crisis.

China isn’t likely to report negative economic growth, at least not according to official NBS figures. But rising PPI means that much higher consumer prices are just around the corner.

But the CCP’s tools are limited in the near term. Due to ongoing power shortages, it can’t stimulate the economy efficiently, as there isn’t enough electricity generated to support higher activity. But without increasing power supply, China can’t increase economic growth. Already, some areas are seeing factories being shut to lower strain on the power grid.

The U.S. central bank has lowered monthly asset purchases (quantitative tightening) starting this month. In scaling back the Fed’s pandemic-driven economic stimulus, Fed Chairman Jerome Powell has laid the groundwork for the Fed to raise interest rates in mid-2022. But if U.S. inflation continues to worsen, Powell may be forced to act sooner.

Few experts in the United States have chimed in on this impact, as the focus has been the domestic economy, but Citadel LLC founder and CEO Ken Griffin recently rang the warning bell.

“China and the United States are very tightly integrated,” he said at the 2021 Caixin Summit in November.

“Any steps that take place in the United States to slow inflationary pressures will put pressure on global growth, hurting the economies of both countries.”

So far, U.S. consumer prices have outpaced Chinese prices, at least officially. A Federal Reserve move to tighten monetary policy in the U.S. will likely have a negative impact on China given that its economy is still struggling with COVID-19-related lockdowns and travel restrictions.

The expectation of monetary tightening in the U.S. will likely weaken China’s currency and force outflows from the world’s No. 2 economy. For an economy still struggling to find its footing, it’s an unwelcome development.