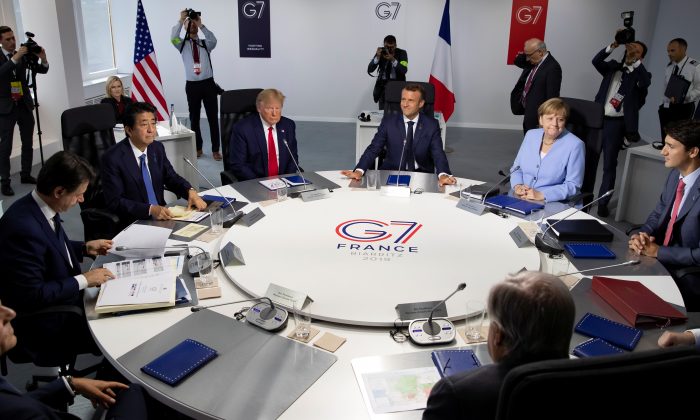 U.S. President Donald Trump announced on Twitter on Aug. 23 a new round of tariffs on $550 billion worth of Chinese goods, and has told U.S. companies to move their operations out of China.

China expert Frank Xie believes that when the trade war has escalated to that level, it will bring devastating consequences to China’s economy, while not having a major impact on the United States.

In an interview with the Chinese-language edition of The Epoch Times, Xie, an associate professor at the University of South Carolina’s School of Business Administration, said that when this latest tariff increase is imposed, the United States and China will become completely decoupled economically.

“The Chinese communist regime has been trying to drag [the trade talks] out to give itself more time, and the Trump administration is fully aware of that. In addition, Beijing has broken its promises several times. They promised to buy agricultural products, but later changed their mind. At a certain point, they even promised to buy large quantities of agricultural products, but they did not make any purchase thereafter. They have certainly irritated the American people,” Xie said.

“President Trump doesn’t trust the Chinese communist regime anymore. That is why he keeps increasing tariffs on Chinese goods.”

Trump attended the G-7 summit (held from Aug. 24 to Aug. 26 in France), where he sought to reach a consensus with European leaders. The European Union is expected to demand the same terms from China as the United States has obtained through the trade talks, Xie said.

Based on Xie’s analysis, Japan and the UK will certainly take the same stance as the United States. Italy is the only G-7 country that has participated in China’s “One Belt, One Road” (OBOR, also known as Belt and Road) initiative. However, Italy is in the process of forming a new government, which may very likely withdraw from OBOR, Xie said.

He pointed out that if the CCP loses the U.S., European, and Japanese markets, essentially the whole world is shutting the door to China, and it will return to the “closed country” state.

In Xie’s opinion, China has basically lost its last chance in the trade talks, and the CCP has no choice but to continue to fight stubbornly and desperately, and at the expense of Chinese consumers.

“From the upper to the middle level of the CCP, they all know that no matter how they try to procrastinate, there isn’t much time left before the Chinese regime is hit hard by the trade war,” Xie said. “What we’ll see next is capital flight, and many CCP officials will accelerate their plans to leave China.”

Trade War Is Devastating to China but Not US

According to Xie, the trade war will have little effect on the U.S. economy.

“That’s because China’s retaliatory tariff increases are mostly imposed on automobiles, auto parts, petroleum, and agricultural products. Actually, China won’t be able to restrict the imports of these products because it has a high reliance and demand for them,” he said.

However, the United States can easily replace Chinese imports with products from other countries.

”The key issue is whether there are options,” Xie said. “China cannot produce most of the imports from the United States.

“For China to impose tariffs on American imports, this would only increase purchase prices for Chinese consumers; it’s a suicidal act,” Xie said. “For the United States, consumer reliance on Chinese products is essentially about a preference for bargains, and almost all Chinese products can be replaced with imports from other countries. Therefore, the impact is completely manageable.”

More importantly, the restructuring of the global supply chain, with companies moving manufacturing out of China, is devastating to China’s economy.

Xie pointed out that it’s become clear the trade war will be a prolonged confrontation between the two countries, and the supply chain will continue to shift to other countries from China. Most notably, Taiwan, Vietnam, Bangladesh, South Korea, and India are replacing China’s role as the biggest global manufacturing hub. As a result, in the near future, tens of millions of Chinese workers will be out of a job.

In addition, the decline in China’s exports to the United States will drastically reduce China’s trade surplus, which, in turn, will exhaust China’s foreign exchange reserves. The Chinese regime’s ability to intervene in the yuan exchange rate will also decrease as a result. That will then trigger a new round of bubbles bursting, such as a housing market crash, banks going bankrupt, and a credit crisis.

“China’s economy will decline. From the bursting of the real estate bubble, to higher unemployment, to the deterioration of the entire economic environment, combined with inflation, the Chinese economy is facing an almost complete collapse,” Xie predicts.

Another important insight gained through the U.S.–China trade war is that the CCP has revealed its true nature in its tit-for-tat tariff retaliation, Xie said.

“The United States, from the government to the common people, has come to realize that the CCP is an evil regime. It doesn’t hesitate to sacrifice the interests of the Chinese people for the sake of its own survival.”