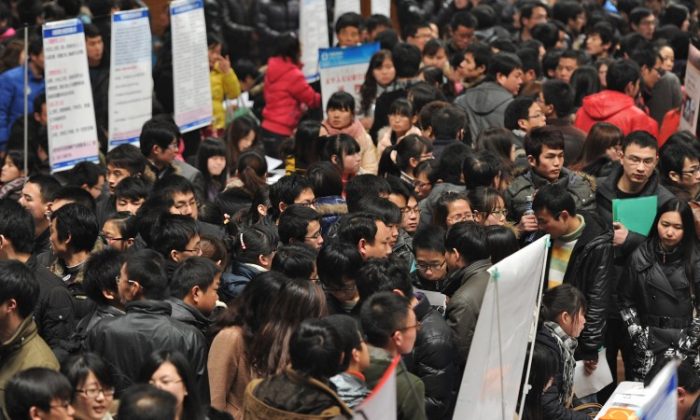 Thousands of job seekers flock to an employment fair in Hefei, east China's Anhui Province on Feb. 25. A decline in the housing market will create unemployment and depress other economic sectors that hinge on real estate. (STR/AFP/Getty Images)
Opinion

China’s economy has experienced a recent slowdown that comes as no surprise to economists who have kept the fundamental problems of the country’s macroeconomic policies in sight. China’s economic reform in the late 1970s set up the system in such a way that failure was inevitable.

The two policies at the heart of the Chinese economic model have been the over reliance on investment and exports, supported by artificially low interest rates.

High investment from the Chinese regime and foreign investors in infrastructure and manufacturing capacity has been a major driver of growth in China’s gross domestic product (GDP).

The massive investment in China was spurred in part by artificially low interest rates. After accounting for inflation, these rates were at zero or negative. In other words, free money.

That money, obediently supplied by state banks, has been ploughed into infrastructure, real estate, and other big industrial projects. But there are only so many bridges, railways, and one-ton spools of copper that can be put to productive use.

That doesn’t mean, however, that production has stopped. Steel output accounts for eight percent of GDP, and a failure to produce steel would hit the economic numbers badly. So steel mills are still running at 95 percent of capacity, producing goods that no one buys.

China’s solar sector has perhaps the worst overcapacity. As a result of distorted incentives, the production of solar panels has been running at a rate of 20 times the total national demand, and twice that of world demand, according to some estimates.

Overcapacity plagues other sectors, including manufacturing, mining, aluminum, iron ore, cement, and more. Further growth in these areas would simply destroy wealth. Resources are consumed for investments that have little productive use and will not generate meaningful cash flows.

Extremely low interest rates made all of this possible. State-owned companies, which need a lot of money, can borrow as much as they want for little cost. Those who save their money—families and workers—are effectively subsidizing these operations through their bank deposits, because they have few other places to put their money.

They do have one other place: real estate. For most people, investment in real estate is the only place they can get a decent rate of return on their money, exceeding consumer price inflation. As a result, the massive investment into housing has created an enormous bubble.

Investment in real estate accounted for 13 percent of China’s GDP in 2011, while revenue from land sales accounts for 30–50 percent of the local governments revenues.

With vacancy rates at 30 percent in some places and prices that are often far out of kilter with the spending power of the regular Chinese, the housing sector is encountering trouble and many developers are shutting down. A decline in the housing market will create unemployment and depress other economic sectors that hinge on real estate.

Low real interest rates, high cost of living for regular people, and the control of resources by industries that are close to the state, means that average Chinese households have little spending power.

Thus, from 1990 to 2011, the share of consumption in China’s GDP went from 47 percent to 34 percent. In the United States consumption makes up around 70 percent of GDP.

The economic model China has relied on for so long is no longer working. More investment is getting less return, and in many cases simply destroys wealth.

The only way forward is for consumption to increase as a share of GDP. That, however, will require reversing the distortions in the economic system built around families and factions in the Communist Party, who benefit immensely from the current arrangements.

Absent of significant reform, meaning a fundamental transformation of the country’s economic growth model, the system will implode.

With reporting by Pingping Yu.

Tianlun Jian, Ph.D., writes regularly on the Chinese economy and advises The Epoch Times on economics. His blog is Chineseeconomictrend.blogspot.com.