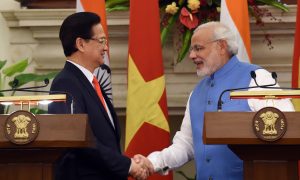 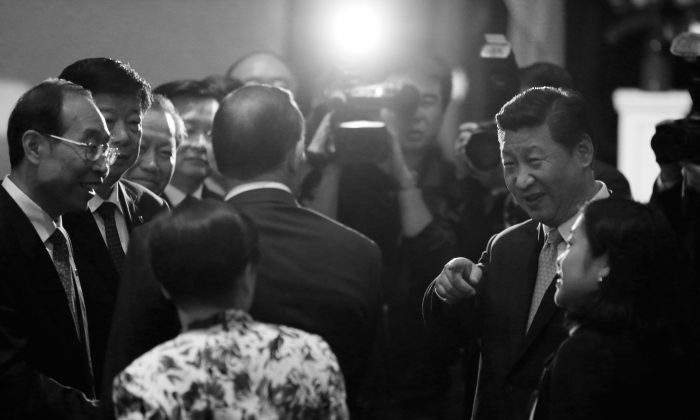 The Chinese regime is taking a three-pronged approach in its bid to push U.S. influence out of the Asia-Pacific and extend its reach beyond its territorial waters.

Its first strategy is to undermine the United States in the region—a strategy clearly stated by Chinese leaders just days ago when, as reported by Financial Times, they signed a military cooperation pact with Russia to counter U.S. influence in the Asia-Pacific.

Its second strategy is to continue pressing its territorial claims in the South China Sea and East China Sea, through a long-term strategy of harassing incursions in disputed territories and land-grabs in unguarded waters.

Its third strategy is one that the Chinese regime is trying to advance following the G20 summit in Australia. It’s a charm offensive, and one often accompanied by stacks of cash and hidden expectations.

Xi said China stands ready to “expand government-to-government, legislature-to-legislature and party-to-party interactions with the island countries,” according to China’s state-run Xinhua news agency. He added that China will take them for a ride on the “Chinese ‘express train’ of development.”

The deals signed with the island countries are similar to deals the Chinese regime is using in South America and Africa to expand its influence—and carry much deeper weight than they seem.

Milos Alcalay, former Venezuelan Ambassador to the United Nations, said during a Forum 2000 conference in Prague in October 2014 that China’s expansion is not just about economic enterprise, but also “a geopolitical expansion.” A country like Venezuela that is facing growing debt becomes economically dependent on China, Alcalay said.

Once a country becomes dependent on the support of the Chinese Communist Party, history has shown they’ll go to often great lengths to retain that support.

During the October panel, Etienne Smith, a political scientist specializing in African Studies from the French university Sciences Po, explained how the Chinese regime has leveraged its influence over 14 African countries to make them cut diplomatic ties with Taiwan.

China has clear interest in developing stronger ties in the Asia-Pacific region.

The leaders Xi signed deals with, according to AFP, “form one of the largest voting blocs at the United Nations.” They are also part of a region where the Chinese regime is facing some of its heaviest push-back, from countries including Vietnam, the Philippines, the United States, and Japan.

And if the Chinese regime’s strong economic influence in Australia tells us anything, it’s likely it will begin leveraging these new deals behind the scenes.

In Australia, there is broad discussion on whether its leaders will soon be forced to choose between aligning themselves with China or the United States.

Last year, the Sydney Morning Herald reported that the “day will come when we must choose US or China.”

The article echoed comments from Song Xiaojun, a former senior officer of the People’s Liberation Army. According to The Age, he said in 2012 that Australia can’t juggle between the United States and China, and will eventually need to choose a “godfather” to protect it.

The effect of Australia’s economic dependency with China came to light during the G20 meeting. Police in Australia’s New South Wales were taking orders from Chinese authorities, and were breaking up human rights protests as the Chinese regime’s leaders attended the conference.

In an interview with Epoch Times in Australia, one of the protesters, Ms. Zhao, summarized the concerns of those who are already beginning to face the other end of China’s charm offensive.

“It is compromising Australian values,” Ms. Zhao said. “I hope the suppression of freedom in China is not exported and does not start to change this society in a subtle way before we realize it.”