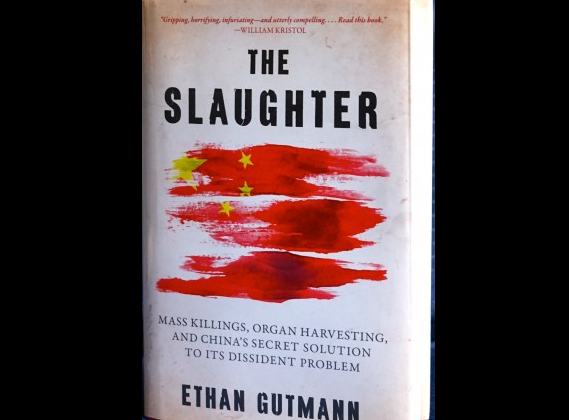 A book seven years in the making, concerning the world’s largest population and its biggest open secret of murder, torture, brainwashing, and organ harvesting, was promoted in U.K. events in the last week of November.

The Slaughter: Mass Killings, Organ Harvesting, and China’s Secret Solution to Its Dissident Problem by Ethan Gutmann was published in August 2014. The author introduced his book to the U.K. through an illustrated talk held at Word Power Books in Edinburgh and in the large four-story Waterstones Bookshop in the center of Leeds.

Supported by information from Nobel Peace Prize nominee David Kilgour, and a first-hand account by a survivor of torture inside the state prison system of China, Ethan Gutmann presented a very human view of the inhuman actions and scale of state-wide control by the Chinese Communist Party (CCP) to repress dissent.

“Most of the book is actually not about organ harvesting, it’s about people, [Falun Gong] practitioners. About their struggles in prison and so forth and it follows certain characters for a long time,” Mr Gutmann said.

To demonstrate the personal approach he uses in The Slaughter, Mr Gutmann gave profiles of the half-dozen people he calls true heroes who intercepted the signal of eight CCP TV channels going to 3,000,000 cable subscribers in Changchun city, Jilin province, in northeast China 12 years ago.

Mr Gutmann sees this group as world-changers as what they did and the effect it had on the CCP inspired many North Americans to begin work on breaking the Internet blockade by China. Their programmes were used around the world to resist repressive regimes. He spoke of its usefulness in the Iranian Green Revolution when a page in Farsi was put through programmes devised by Falun Gong practitioners.

Falun Gong is a peaceful meditation and exercise practice banned in China since 1999, but practiced freely elsewhere worldwide.

The Changchun interceptors were Falun Gong practitioners. There were 18 interceptors, though the names of only 6 are known.

The Changchun interception lasted 40 minutes correcting misinformation put out by the CCP about Falun Gong, yet, Mr Gutmann stated, its echo has changed the world.

Mr Gutmann also showed how he sees China’s internal executions have changed by displaying two photos: one of four or five uniformed men in uneven distribution on a small plot of land with a dead body at the base of the picture. This was from 1995. He said some of the officers were fairly high-ranking, one grinning, others unsure or triumphant. One wears sleeve covers to protect his uniform from the back-spatter of shooting the executed civilian.

That was in black and white. The next was in colour. Three people wearing white surgical masks and gloves, two dressed in dark blue  theatre gowns and trousers, one in the centre in light blue, stand in a hallway in bright light  holding the broad handles of two cooling boxes. These boxes contain extracted organs we were told. “These are the new executioners,” Mr Gutmann said, “they are surgeons.”

This is the organ harvesting mentioned in the book’s title: the surgical removal, often without anaesthetics, of healthy organs without the consent of the ‘donor’ and transplanted to order into the bodies of people able to pay the high prices.

The majority of the organs are from Falun Gong practitioners, as this is by far the largest group the CCP are persecuting.

It has recently been confirmed that U.K. patients have travelled to China for organ transplants. One, from Birmingham, has been interviewed by Mr Gutmann.

During the same week, Mr Gutmann was also on panels with Mr Kilgour and his co-author of the 2006 book on organ harvesting, Bloody Harvest, International Human Rights lawyer, David Matas,  and others, to disseminate information about organ harvesting. They have been to the UK Parliament in London, The Scottish Parliament in Edinburgh, The Welsh Assembly in Cardiff, as well as Glasgow City Council, and Nottingham University.

National Review described Ethan Gutmann as a “mammoth sociological, political whistleblower”. His book “Losing the New China” won the “Spirit of Tiananmen” award, New York Sun’s “Best Book of the year,” and the “Chan’s Journalism Award” for outstanding writing. Gutmann’s seminal research into Chinese Internet surveillance, the Laogai System, and the intersection of Western business with Chinese security objectives has received sustained attention in Washington, London, and Brussels at the government and intelligence level.