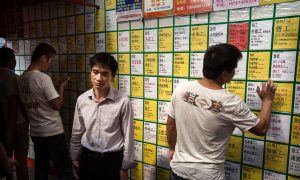 Back in 2009 Evan Lorenz had a problem. Right around the market bottom, he was too good at spotting undervalued stocks to buy, so he had to leave the hedge fund where he was previously in charge of running the short book—there simply weren’t any good stocks to short around at that time.

After he moved to New York and started work for Grant’s Interest Rate Observer, his talent at finding overvalued companies brought him right back to China, which is now his main focus in his work for Grant’s.

Epoch Times spoke to Mr. Lorenz about the origin of China’s debt problem, possible solutions, low growth, a difficult adjustment process, as well as a coming devaluation of the renminbi.

China is going to have to deal with this gigantic debt overhang, as it’s both a very poor and increasingly old country.

Evan Lorenz: It does seem like China’s overinvestment bubble is starting to pop with bad repercussions for China and the rest of the world at the moment. In the context of numbers: China is approximately a $10 trillion economy. Its banking system is approximately $29 trillion plus in size. Its bank assets are roughly three times GDP.

Anne Stevenson-Yang of JCapital Research looked at the number of loans and bonds that have to be rolled over or evergreened because the borrowers themselves can’t service them. She concluded about 24 percent of all bank assets may, in fact, be impaired.

They are evergreening problem loans instead of actually writing them off. So they look money-good on the balance sheet, but the problem is just kicked forward in time.

That would imply that bad debt to GDP is approximately 68 percent. The last time that China had an overinvestment bubble was at the end of 1999.

At the end of 1999, China’s bad debt to GDP was estimated to be 33 percent. It’s estimated because there were no real good numbers at the time. As much as people doubt China’s official statistics today, at least we have those statistics at hand and we can actually look at them.

So the problem is at least twice as large in terms of China’s output today as it was in 1999. In ’99 China had a lot going for it. It was about to enter the World Trade Organization (WTO); it was opening up its economy more to foreign investment. It was allowing U.S. and other foreign banks to come in and recapitalize and improve the management of its own domestic banks.

I do think a devaluation at this point is inevitable, it’s just going to happen.

Today China doesn’t have a WTO it can join, it’s economy has already been opened to foreign investment, and its banking system is much larger than the rest of the globe.

China’s banking assets as a percentage of world GDP are about 40 percent. There is no precedent for a banking system in one country being that large in terms of output. The United States in 1985 peaked at about 33 percent of GDP.

Japan when the Yen was surging in the early 90’s peaked at about 27 percent of GDP. 40 percent is just a number we’ve never seen in history.

If you look at Japan in 1991, its banking system was, for all intents and purposes, insolvent. They just didn’t write off loans and for the next 20 years the economy had no real growth.

It had a lot of things that it could do then that it just can’t today. If we assume that it needs to grow at twice the rate to deal with a problem twice as large in terms of GDP, China would need to generate real GDP growth of around 20 percent in the next 6 to 7 or so years. I don’t think there’s any credible person right now that thinks China can grow that fast.

It seems like China has reached the end of its debt-servicing capability relative to its stock of obligations.

Epoch Times: So no growth for China in the future?

China is going to have to deal with this gigantic debt overhang as it’s both a very poor and increasingly old country.

Its working age population peaked last year, according to the World Bank. So its workforce is going to be contracting at the same time as they have this debt overhang that they have to work through. It has a lot of problems. It was poor before it got rich, it’s going to get old before its fully developed.

You have a lot of unserviceable liabilities tied to a lot of assets that can’t actually service them, so yes growth does slow.