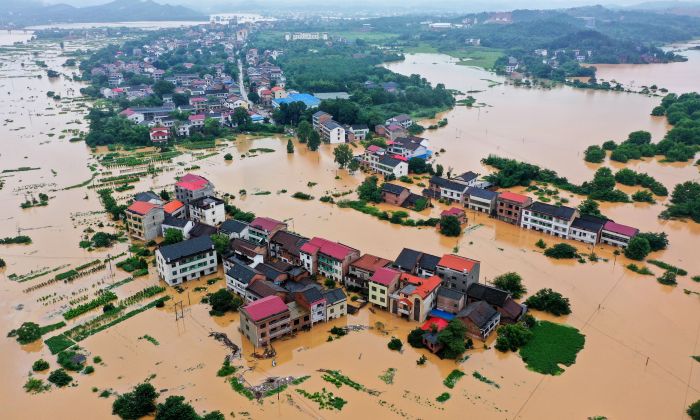 Scores of Chinese netizens have recently begun sharing videos of local villages and towns being partially submerged after rivers broke through their banks.

On July 16, many Chinese Twitter users, such as @Lengshui8964, posted photos and videos of the Xiang River in Hunan Province breaking the bank, causing flood waters that began washing away people’s belongings. Twitter is banned in China, but many Chinese use software to bypass China’s firewall.

Every summer, China’s southern regions faces the prospect of heavy flooding. This year, flooding is predicted to be at historic levels as river banks overflow.

The Ministry of Water Resources announced on July 14 that this year’s flooding will be worse than in 1998. “Because of heavy rain, water levels at 377 rivers from 18 [Chinese] provinces are higher than the warning line. That is about 80 percent more than the quantity in 1998. Gui River in Guangxi Province, Xiang and Zi rivers in Hunan Province, Jian and Futun brooks in Fujian Province, are among 46 rivers that are at danger levels. 15 rivers have already experienced historic floods.”

The Ministry said that from July 16 to August 15, both the southern and northern parts of China will get lots of rain, including Jiangsu, Anhui, Zhejiang, Shanghai, Sichuan, Guizhou provinces, and the municipality of Chongqing. In the north, Liaoning Province, Hebei Province, and Tianjin City will be impacted.

The Ministry estimated that China’s main river systems will experience flooding, including the middle and lower reaches of the Yangtze River, parts of the Yellow and Hai rivers, and the Liao river.

Meanwhile, in southern Guangdong Province, high water levels at the Pearl River will cause drainage systems to be over-flooded in the next 30 days.

The Ministry did not mention the Xiang River flooding. Netizens have also reported that parts of Jiangxi, Guangxi, and Guangdong provinces have already been submerged by flooding.

So far, few media have reported about flooding after July 11. On July 9 and 10, a local news outlet in Hunan Province reported that there were four sections of the Xiang River that broke its banks, submerging at least 12 villages.

On July 17, the state-run Xinhua made no mention of China’s flooding but reported that India, Nepal, and Bangladesh have experienced flooding since the beginning of July.

On the homepage of Xinhua’s website, there is only a short news story about how a Chinese veteran applied to rejoin the army in order to help locals in flooded areas of China.

Mrs. Zheng, who lives in Huaihua City of Hunan Province, told Radio Free Asia on July 17: “We don’t know how many people have died, nor how many houses collapsed due to the flood. This year is very abnormal. It has been one week already, but the water level is still so high. Normally after the rain has stopped, the waters would recede. But this year is different.”