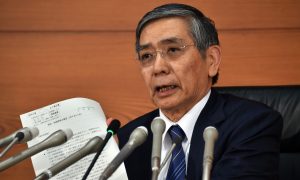 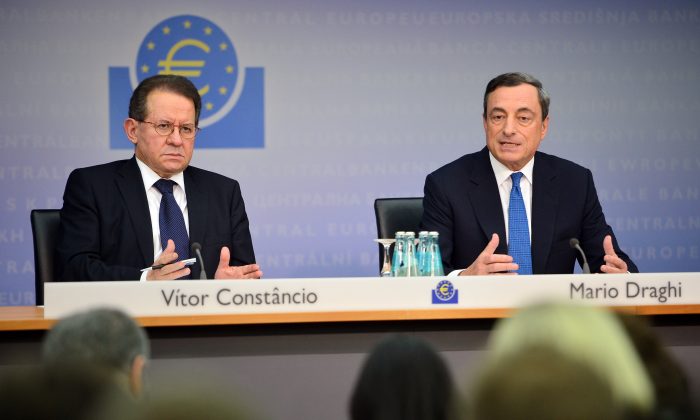 Mario Draghi (R), president of the European Central Bank (ECB) and vice president Vítor Constancio speak to the media following the monthly ECB board meeting on Nov. 6, 2014 in Frankfurt, Germany. Constancio mentioned on Nov. 26 that the ECB could start purchasing sovereign bonds in the first quarter of 2015. (Thomas Lohnes/Getty Images)
Business

What should have been a period of relative calm before some potential risk events was anything but, with the People’s Bank of China (PBoC) and European Central Bank (ECB) surprising markets.

A surprise interest rate cut is never a good sign. On Nov. 21, the PBoC cut rates for the first time since July 2012 (one-year lending rate down 0.40 percent to 5.6 percent and one-year deposit rate down 0.25 percent to 2.75 percent) despite unemployment and inflation being stable and benign.

What do the Chinese authorities know about their economic growth rate that the rest of the world doesn’t? It’s probably a good bet that it’s a lot lower than 7 percent.

But also, in response to the Bank of Japan’s aggressive easing at the end of October, the renminbi has appreciated against the yen and a rate cut can curtail that rise.

ECB president Mario Draghi’s comments on Nov. 21 brought back memories of his July 2012 “whatever it takes” speech that succeeded in removing the eurozone break-up premium in peripheral bond yields.

His blunt message this time was aimed at “excessively low” inflation and was backed up on Nov. 26 by comments from ECB vice-president Vitor Constancio about possibly starting sovereign bond purchases early next year.

Quantitative easing within the eurozone has always been a difficult pill to swallow for the Germans so it remains to be seen how the ECB will swell its balance sheet. The ECB has its monetary policy meeting on Dec. 4.

Equity markets moved higher over the period with the S&P 500 and Dow Jones Industrial Average closing at record highs again, but five- and 10-year bond yields moved sharply lower. The U.S. 10-year yield is back around levels of mid-October when the equity markets were in free fall.

Despite a hawkish Fed and 3.9 percent revision to third-quarter U.S. GDP, the 10-year yield is being dragged lower by falling German bund yields. In other words, liquidity will flow to higher-yielding safe assets.

It should also be noted that despite a modest uptick in inflation to 1.8 percent in the U.S., the 1.85 percent 10-year inflation expectations are the lowest since October 2010.

The notable development in the Canadian economy was a rise in inflation to 2.4 percent (October year-over-year), which is the fastest rise since February 2012 and looks like a persistent phenomenon. The Bank of Canada has its rate-setting meeting on Dec. 3, and although the target overnight rate isn’t expected to change, markets will be looking for clues on what would make the central bank take a more hawkish stance.

The Canadian dollar benefited from the PBoC’s rate cut and high inflation print and had its biggest one-week gain in three months against the U.S. dollar.

Of course, the big event is the Nov. 27 OPEC oil ministers’ meeting, with suggestions that little change will occur in production from the Saudis and that its partners should hang in there with oil prices having stabilized somewhat now.

Rahul Vaidyanath is a Chartered Financial Analyst (CFA) with 15 years of capital markets experience. He has worked in the Financial Markets Department at the Bank of Canada and as a mortgage bond trader in the U.S. Follow him on Twitter @RV_ETBiz.