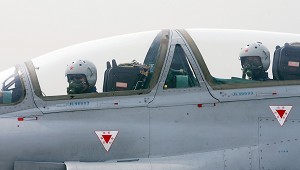 CHINA—China's Air Force has developed its own F-10 fighter jet, according to a detailed Dec. 29 report by China's state-run media.

China's regime-controlled news agency quoted a People's Liberation Army (PLA) Air Force leader who said that since his troop has been equipped with the Chinese developed F-10 fighter jet, the troop has gone through sophisticated training, simulating complex real-war situations and electromagnetic interference.

A state-run television station aired a report on the F-10 jet, showing scenes of the F-10 fighter jet carrying out a variety of tactical drills, including launching missiles and airborne refueling.

The F-10 is a third-generation fighter jet developed by China. Photos of the jet and information about it have been circulating on the Internet for some time prior to the Chinese state-run media releasing its first detailed reports on the aircraft.

The F-10's aerial combat compatibility is not inferior to the U.S.-developed F-16 fighter plane, say some military experts. It was said that the F-10 has the potential to be upgraded to the next generation fighter jet.

Presently, the F-10 and Russian made Su-27 and Su-30 fighter jets are among the advanced fighter jets owned by the PLA.