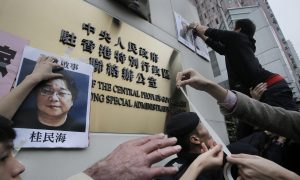 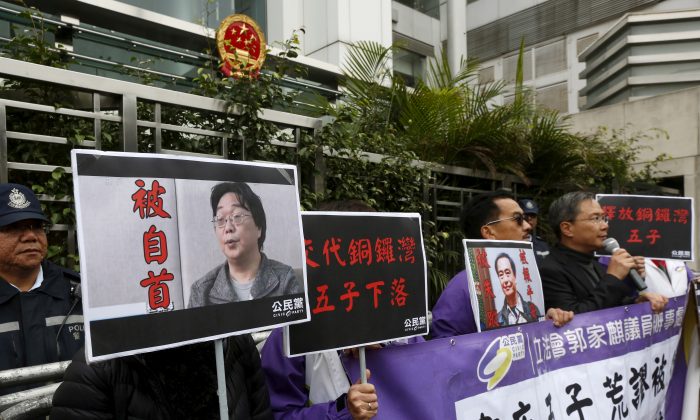 Members of the pro-democracy Civic Party carry a portrait of Gui Minhai (L) and Lee Bo during a protest outside the Chinese Liaison Office in Hong Kong on Jan. 19, 2016. (Bobby Yip/Reuters)
Europe

STOCKHOLM—China threatened Sweden with unspecified “counter measures” if its culture minister attends a literary award ceremony on Nov. 15 for Gui Minhai, a Swedish citizen who was abducted in Thailand in 2015 and is now in detention in China.

The case of Chinese-born Gui Minhai, who studied in Sweden in the 1980s and was based in Hong Kong when he published books critical of China’s leaders, has soured relations between Sweden and China.

Svenska PEN, a literary organization, has awarded Gui Minhai the 2019 Tucholsky Prize, praising his work in the service of free speech. An empty chair will symbolically represent the writer at the ceremony in Stockholm on Friday, Svenska PEN said.

“We urge Svenska PEN to cancel the award to Gui Minhai immediately, and Swedish government officials not to attend the awarding ceremony,” Chinese Ambassador Gui Congyou said in a transcript of an interview with Swedish radio published by the Beijing’s embassy in Stockholm.

The presence of Culture Minister Amanda Lind, who was due to hand out the award, would bring “serious negative impacts,” the ambassador said. “We will surely take counter-measures.”

Asked what such consequences would be, Ambassador Gui said Sweden’s image in China would be damaged and that “normal exchanges and cooperation will be seriously hindered.”

Sweden’s foreign ministry said its view remained that China should release Gui Minhai and that it had contacted Chinese authorities over the ambassador’s statements.

“It is not okay to interfere with what the Swedish government does,” Foreign Minister Ann Linde said in an emailed statement to Reuters.

In the transcript, China’s ambassador said Gui Minhai was being held on suspicion of revealing state secrets and intelligence on China.

By Simon Johnson and Johan Ahlander