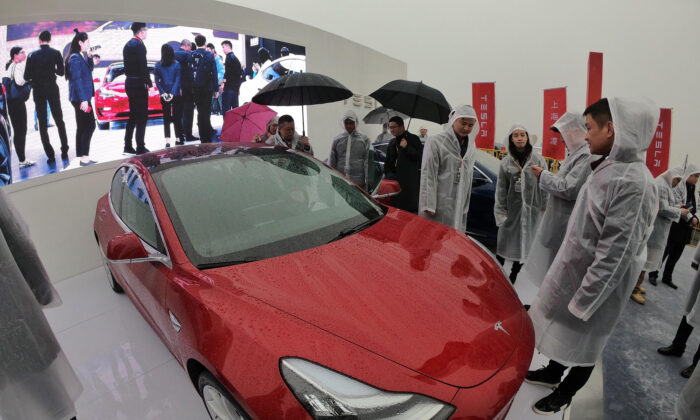 Guests look at a Tesla Model 3 during a ground-breaking ceremony for a Tesla factory in Shanghai, China on Jan. 7, 2019. (STR/AFP via Getty Images)
China Business & Economy

China Ends Electric Vehicle Subsidies as Sales Cut in Half

China is ending all electric vehicle subsidies for its 486 registered manufacturers after production fell by over a third and sales plunged by almost half.

The Ministry of Industry and Information Technology issued a draft of a 15-year EV plan on Dec. 3 that would mandate electric vehicles to account for 25 percent of China’s annual domestic light-vehicle sales by 2025, despite ending its $7,000 “new energy vehicle” (NEV) subsidy this month that was cut in half in June.

China’s October vehicle production fell by 1.7 percent from the same month a year earlier, and sales declined by 4 percent. But the biggest declines were centered in NEVs that saw production fall by 35.4 percent and sales tank by 45.6 percent, according to the China Association of Automobile Manufacturers.

China spent $36.5 billion on NEV subsidies from 2009 to 2017. By controlling between 50 to 77 percent of the global supply of anode, cathode, separator, and electrolyte for battery components, China broke the 500,000 annual sales mark in 2016 by making and selling over three times more NEVs than the United States.

Chinese leader Xi Jinping declared at the Nineteenth Communist Party Congress in October 2017 that he would expand the state-sponsored effort by requiring automakers to be scored on average fuel consumption. To foster the key technology, manufacturers with over 10 percent of production of NEVs could sell credits to other manufacturers for cash.

In order to move up the value-added chain to sell larger and more expensive NEV models, like Tesla, the Chinese regime offered 4.4 credits to any locally-built electric car that could run for more than 186 miles (300 km) per charge. Top domestic brands like Volkswagen and General Motors that each produce about 4 million vehicles a year would have to sell at least 100,000 NEVs a year to avoid stiff penalties.

American billionaire Elon Musk announced he would build Gigafactory 3 in Shanghai to build 500,000 Teslas a year, and Volkswagen stated it would pump $12 billion into China electric vehicle production.

But President Trump imposed 30 to 50 percent U.S. tariffs on Chinese solar panels and washing machines in January 2018. He followed up in March with additional tariffs of 25 percent on steel, and 10 percent on aluminum. As the Sino-U.S. trade war has ratcheted up tariffs and retaliatory tariffs, China car sales have slumped for eighteen months.

Despite deep pockets and a goal of establishing itself as the world’s top seller of NEV units, NIO lost $2.8 billion in the 12 months ending in June 2019 on revenue of $1.2 billion. With its stock tumbling, the Shanghai-based company cut more than 20 percent of its workforce through September, when Tencent was forced to inject another $100 million.

NIO Chief Executive Officer William Li complained, “Our sales have been under pressure since the subsidies went down.” He added, “It has come to a new era that one can only win customers with quality products and services.”

The implosion of the Chinese electric vehicle market was not predicted. Wood McKenzie consultants in early October were still highlighting that China—with about two-thirds of the world’s manufacturing capacity for lithium-ion batteries—would soon dominate global auto production as governments moved to ban internal combustion engines and transport electrification expand to planes and boats to barges and trucks.

The only industry risks that Wood McKenzie warned could interrupt the bright future was on the supply side, due to a China-driven quadrupling of raw material demand for lithium, cobalt and nickel by 2030 that may overwhelm capacity expansion.