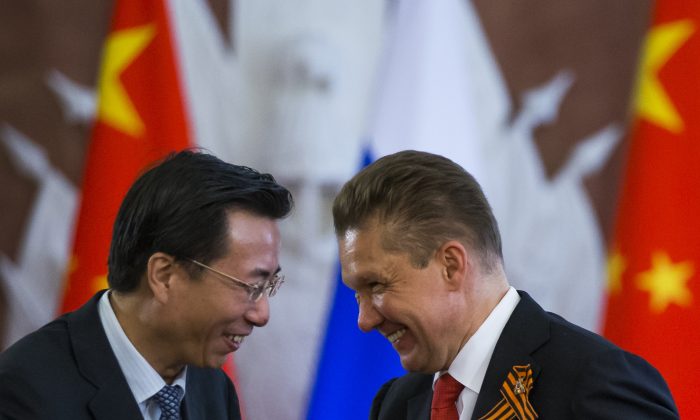 China has established itself as a top lender to emerging market energy firms lacking access to capital.

During Brent crude’s 64 percent slide over the last 24 months, China—more than any other country—has funneled massive amounts of funding to struggling energy companies in emerging markets such as Russia and Brazil.

Over time, China has fined-tuned its approach. By eschewing outright purchases in favor of loans and minority stakes, China is able to obtain the necessary energy supply without the hassle of long-term ownership.

In early March, Russian state-controlled Gazprom secured a five-year, 2 billion euro ($2.28 billion) loan from Bank of China, the biggest loan it has ever secured. It provides a critical lifeline for Gazprom to continue its ambitious infrastructure projects.

Last month, Brazil’s embattled state-owned Petrobras turned to China for a $10 billion loan from China Development Bank in exchange for guaranteed supply of petroleum to Chinese companies. Petrobras is the most indebted company in the oil industry, and has danced on the cusp of bankruptcy over the last two years as oil prices have fallen to multi-year lows.

The recent energy deals—structured as loans in exchange for supply contracts—are a pivot away from China’s past penchant for acquiring assets in the energy space.

Consider it a lesson learned from the Nexen fiasco, China’s biggest foreign energy acquisition that ended as a bust and embarrassment.

CNOOC sent its foreign chief Fang Zhi to run the Calgary-based Nexen, and discovered that the company was in worse shape than previously imagined.

The company long struggled to extract value from its Long Lake oil sands project. The project has experienced cost overruns for years, and is one of the least productive oil-sands operations in Alberta, according to a report by BMO Capital Markets.

Besides disappointing financial returns, Nexen has become a PR headache. A Nexen oil pipeline burst in 2015, spilling more than 30,000 barrels of crude oil into Alberta and decreased production temporarily. Fang had to publicly apologize, and the disaster cut into Nexen’s energy production for months.

China has long coveted the Canadian oil sands, which have the world’s largest proven oil reserves. Their high extraction costs and lower-grade heavy crude however, have a breakeven point of around $50 per barrel for producers, according to a TD analysis. Today’s low oil price environment has weighted on Nexen’s valuation since CNOOC’s purchase, and it stands as the worst energy acquisition by a Chinese company.

Crude oil’s price collapse shortly followed introduction of Western sanctions against Russia in 2014. China stepped in to participate in several oil and gas projects, filling in the technology and financing gap left by Western companies, particularly for projects in the Russian Arctic and Siberia.

As the world’s second-largest energy consumer, China has reasons to take advantage of cash-strapped energy producers during a period of distress for the industry. But it has wised up since its ill-fated Nexen purchase. China has become selective, relying more on debt and strategic partnerships.

Rosneft NK OAO, Russia’s biggest oil producer, is in talks to allow Chinese companies to invest in its offshore Arctic projects that were originally cancelled in 2014 after ExxonMobil pulled out of the joint-venture due to sanctions. Rosneft last year secured a 20-year deal from China worth around $500 billion—according to its CEO Igor Sechin—which could replace Saudi Arabia with Russia as China’s No. 1 oil supplier.

While the latest 2 billion euro loan to Gazprom is small relative to the company’s overall capital expenditure needs, it is important as the first major financing deal between a major Chinese bank and a Russian company.

Gazprom signed a 30-year supply pact in November 2014 with China National Petroleum Corp. (CNPC) worth more than $400 billion at the time. Over time, China would replace Germany as Russia’s biggest gas supply customer.

And China has been selective in extending credit. When it signed the CNPC supply deal, Gazprom was also finalizing a $25 billion financing package with China to fund its new pipeline under construction, dubbed “Power of Siberia,” to supply natural gas to Far East countries. But the deal eventually fell apart, after Beijing pushed for higher interest rates than the company was willing to pay.

As creditor to these companies, China keeps all of the leverage, earns interest, and ensures a future supply of energy.

In the rare cases where the energy producers falter or default—unlikely given they are state-owned—China could hold the option to restructure or convert its loans into equity.

Most importantly, it doesn’t have to navigate the political and environmental landmines of running the business.