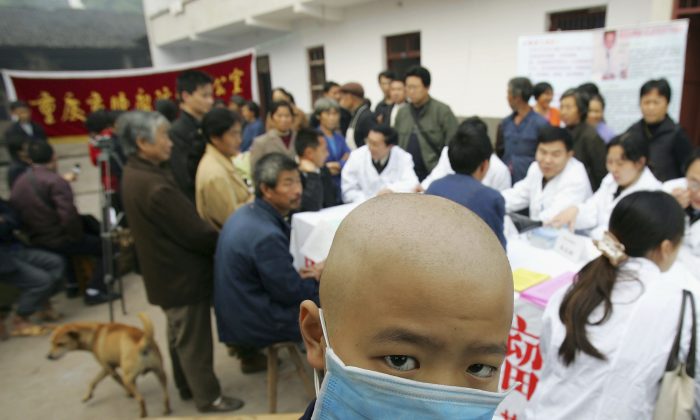 A Chinese boy diagnosed with leukemia wears a mask as he waits for a checkup by cancer specialists in the town of Longshi, in Chongqing City, China, on November 2, 2004. (China Photos/Getty Images)
China-US News

Amid growing pressure from the United States for China to reform its trade policies, the Chinese regime recently announced that it would eliminate tariff duties on all imported cancer drugs, including alkaloid medicines and Chinese herbal medicines.

China’s State Council announced the decision on April 12 and said the changes will be effective beginning May 1.

State media denied that the move had to do with the recent trade tensions with the United States. However, the timing has not gone unnoticed: in recent weeks, the latter had imposed punitive tariffs on Chinese imports as a countermeasure against the Chinese regime’s steel dumping and intellectual property theft. Meanwhile, U.S. President Donald Trump has repeatedly called out China for its trade surplus with the United States—exacerbated by high tariffs on American imports, while Chinese imports enter the United States with much lower duty rates.

China imposes some of the world’s highest tariffs on pharmaceuticals. A 2017 analysis by the European Centre for International Political Economy determined that among low and middle-income countries, import tariffs on medications have the highest compounded financial burden on consumer prices in China—up to $6.2 billion annually.

Compared to other countries, the Chinese regime also places a high value-added tax rate on imported anti-cancer drugs, further burdening consumers. A 2014 study by The European Federation of Pharmaceutical Industries and Associations found that China imposes a 17 percent value-added tax on drugs, compared to 8.8 percent on average among European countries.

Chinese economist Xie Zuoshi said the recent announcement was “without a doubt” connected to U.S. pressure. “The high prices of medications has now become an issue that much of society is concerned about.”

Earlier this month, a Chinese netizen posted a popular article about the burden of paying for medications—especially cancer treatment drugs—due to high tariffs on imported medicines. He hoped that the trade tensions would push the Chinese regime to open up its economy.

Chinese environmental activist Wu Lihong said that many citizens have developed lung cancer, liver cancer, and tumors as a result of the toxic pollutants that have contaminated the air Chinese people breathe, the water they drink, and the earth that grows food they eat. According to a 2016 study published in CA: A Cancer Journal for Clinicians, every day around 12,000 Chinese are diagnosed with cancer. In addition, every day, 7,500 cancer patients in China succumb to their illness.

Because citizens do not have high confidence in the safety of domestic-produced drugs, many rely on imported medication, Wu said. According to state-run newspaper China Securities Journal, imported anti-cancer drugs make up a-third of the market within China—worth 40 billion yuan ($6.37 billion).

“Why else would [the Chinese regime] choose to eliminate tariffs right in the middle of trade tensions with the United States?” Wu said.

However, Chinese rights activist Hu Jia noted that many anti-cancer drugs are not covered by China’s medical insurance system, so many ordinary citizens may still find it prohibitive to afford such drugs. He himself relies on imported medication to treat his liver cirrhosis.