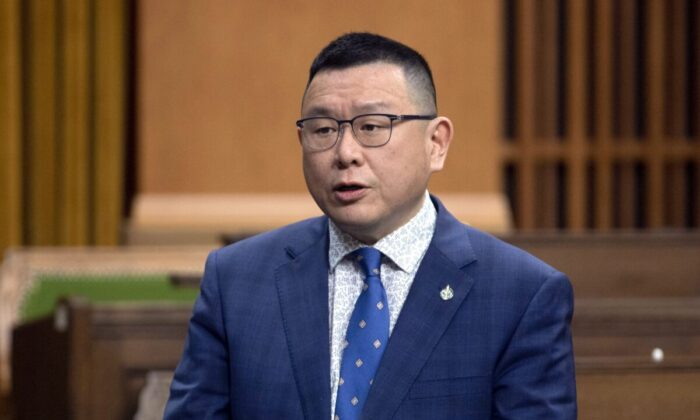 Conservative MP Kenny Chiu rises during question period in the House of Commons on April 13, 2021. (The Canadian Press/Adrian Wyld)
Viewpoints

In April, the Canadian Security Intelligence Service published a report on the security threats facing Canada, concluding that “in 2020, CSIS observed espionage and foreign interference activity at levels not seen since the Cold War.”

“China, Russia, and other foreign states continued to covertly gather political, economic, and military information in Canada through targeted threat activities in support of their own state development goals,” the agency said.

CSIS has been issuing such warnings for at least the last two decades. Despite promises made by politicians to tackle the threat, our political class has displayed a paralyzing lack of will to take the measures necessary to do so. And the more militant the Chinese Communist Party (CCP) becomes, the worse the problem is going to become for our politics, and most importantly, our communities.

During the 2021 election campaign, certain politicians eluded questions around China entirely and reduced them to something only to be mentioned in passing when it was politically expedient. But revelations since Sept. 20 indicate once again that such questions are some of the most consequential of our era, and any serious person in leadership must be willing to finally treat them with the urgency they deserve.

There has already been a deluge of reports suggesting that disinformation campaigns by China-connected organizations might have had a momentous effect on the vote in ridings with significant Chinese populations, impacting the political fortunes of those who hold more hawkish views on China. A few candidates have lost their seats or are likely to lose their seat as of this writing, after previously enjoying wide support in their ridings.

Perhaps the most peculiar—and unnerving—case is the defeat of Conservative MP Kenny Chiu in the riding of Steveston–Richmond East by Liberal candidate Parm Bains. What is disconcerting in this race is the rapidity with which the tide turned against Chiu and with which the change in tone occurred among some of his Chinese constituents in their interactions with him.

Chiu, who lost his seat by a margin of approximately 3,000 votes, noticed increasing hostility among former supporters during the final weeks of the campaign.

In an interview before election day, Chiu told The Epoch Times that although he has been a target of misinformation in previous campaigns, this time “it has been exceptional.”

“It’s nothing compared to what I’ve seen—it’s multi-dimensional,” he said, referring to social media posts, radio commentaries, and online articles in pro-Beijing media that portrayed him negatively.

Many have attributed this to possible campaigns by pro-Beijing forces to slander Chiu due to a bill he introduced in April seeking to establish a registry for agents of foreign governments, which would undoubtedly affect certain organizations with connections to the CCP. Articles posted on WeChat and other media then peddled the narrative that Chiu sought to limit their free speech, even though his proposed legislation would only require those with discernible connections to the CCP to register.

All of which speaks to the dispiriting success of the demagogic CCP point that the Chinese people and the regime are one entity, and as such if the regime is harmed then the people are too. Very attuned to the Western obsession with fighting racism, the CCP has aggressively brandished this point to portray any policy or criticism against it as a bigoted slight against the Chinese race, which reaches peak levels of absurdity when its critic is Chinese, as Chiu is. Regrettably, some Canadian politicians have been willing to repeat this narrative in order to dismiss the need for further action on China and instead make an argument for a policy of continued engagement.

It’s why opponents of the regime have had to go to great lengths to make the rather banal point that their gripe lies with the CCP, not the people who suffer under it and are targeted by it, even if they no longer live in China.

It also speaks to a threat that’s growing expeditiously. Over the last year, a litany of stories and testimonies emerged that have spoken in grisly detail to the experience of activists being targeted by Beijing operatives for their advocacy on behalf of Hong Kongers or religious minorities, or just simply sharing posts that are even slightly critical of the regime from the comfort of one’s Canadian dorm room.

Operation Fox Hunt, Xi Jinping’s “anti-corruption” campaign to suppress dissent and silence identified enemies of the regime, appears to be well underway in Canada. Though the factors the electoral losses of those such as Mr. Chiu could be plentiful, the circumstances are suspicious and warrant an investigation into CCP-affiliated organizations and media.

Of course, such an investigation might upset regime cronies and their most ardent defenders in our Parliament. So be it. It has been far too long that Ottawa has lollygagged on combating foreign interference, and what we just witnessed during the election campaign is yet another testament to that.