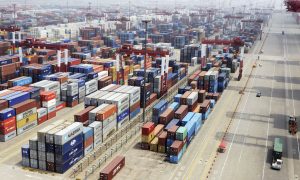 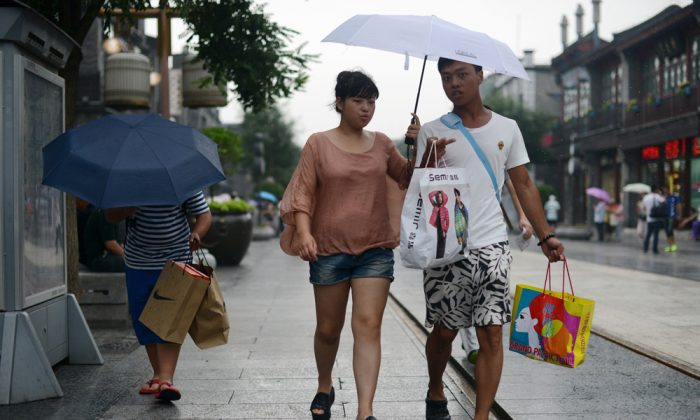 A couple carry shopping bags along a street in Beijing, on July 9, 2013. As Chinese exports slow, domestic consumption in the world’s most populated country is failing to pick up the slack. (Wang Zhao/AFP/Getty Images)
Business & Economy

At the G-20 summit July 20, Chinese Finance Minister Lou Jiwei tried to divert the increasing attention on a hard landing of the second largest economy in the world by telling the West to mind its own business. “No participant believes in the existence of [a hard landing],” he told Xinhua and elaborated on some of the problems the United States might face if the Federal Reserve scales back Quantitative Easing.

And yet, behind all the posturing, the cracks in the Chinese economic facade are becoming bigger and bigger. The PMI predicts slowing employment and a reduction in new export and domestic orders. Société Général analyst Albert Edwards has bet on a Chinese hard landing since 2011 and explains there is worse to come.

“Perhaps, though, the most decisive macro factor for all markets will be any slide into deflation in China. Certainly many see this as conceptually possible because of China’s heavy over-investment. But is this fear now turning into reality?” he writes in a note to clients.

The answer, he concludes, is yes. The measure to correct nominal GDP for changes in the general price level, called the GDP deflator, only rose 0.5 percent in the second quarter of 2013 compared to a year earlier. If this trend continues, prices for assets, goods and services will actually decline, a horrific scenario for an economy that is mired in debt.

The economic concept behind this dynamic is not much different than what happened in the United States during the subprime crisis. Lower prices for assets such as real estate or stocks make debts comparatively more expensive and harder to service. Local governments, companies, and consumers, who cannot service their debt need to sell assets to recover at least some of the money owed. This puts further pressure on prices, leading to another round of so-called deleveraging.

In the United States, only the Federal Reserve could stop this vicious cycle by printing massive amounts of money and artificially propping up the market for mortgage-backed securities. Recent actions by the People’s Bank of China have shown the Chinese central bank is unwilling to further accommodate financial markets. This is a dangerous proposition.

“[P]erhaps what has surprised the markets most is the willingness of the authorities to keep monetary policy tight as they attempt to regain control of the shadow banking system. This is something many commentators liken to the U.S. sub-prime time bomb in the mid-noughties,” writes Edwards.

If the above scenario holds true, Chinese citizens might find brief respite in lower consumer prices. In the medium term, however, a full-blown deflation scenario will lead to widespread unemployment hurting Chinese workers. Investors and savers will see the value of their stock positions and real estate assets decrease, leading to a loss of wealth.

Edwards finds supporting evidence by looking at producer prices, which have been falling in China for most of 2013. Falling producer prices indicate a lack of demand by companies to buy the raw materials they need to produce goods, fitting perfectly in the picture of a sluggish economy.

“Certainly if the [producer price] data is correct, and it seems to concur with the GDP deflator, history would suggest that the [Consumer Price Index] should be contracting currently, rather than still growing by 2 percent,” Edwards concludes.

He also debunks another claim by Chinese leaders to reform the economy so growth comes mainly from domestic consumption and not exports or investment in infrastructure or real estate.

JP Morgan analysts hit a similar vein when they compare modern day China to Japan in the 1980s. Older readers will remember that Japan then, much like China today, was touted as the next economic superpower, with the United States in decline. As its credit bubble burst, its stock market and real estate collapsed and its GDP growth slowed. Japan never reached the top. JP Morgan analysts think the same could be true for China.

“On the financial side, both countries observed strong credit growth and asset price inflation, with corporate sector debt rising to a dangerously high level,” it says in the report.

Corporate and real estate debt is especially prone to deflation, or falling price levels, as Edwards described. The JP Morgan analysts concur: “A large portion of corporate debt is collateralized by land or property, which, if property values fall, can lead to a downward-spiraling interaction between declines in property values and corporate stress,” with unemployment and a falling stock market to follow.

Many commentators point to China’s large holding of foreign exchange reserves and say that this should help prevent or lessen the burden of debt-deflation. But even this situation is eerily familiar to Japan in the 1980s.

“The current account surplus and large foreign exchange reserves provide a cushion against possible adverse shocks. Interestingly, these mitigating factors also existed in Japan in the late 1980s.” As history showed, they did not help to avoid the consequences of a debt bubble and decades of bad economic policy.