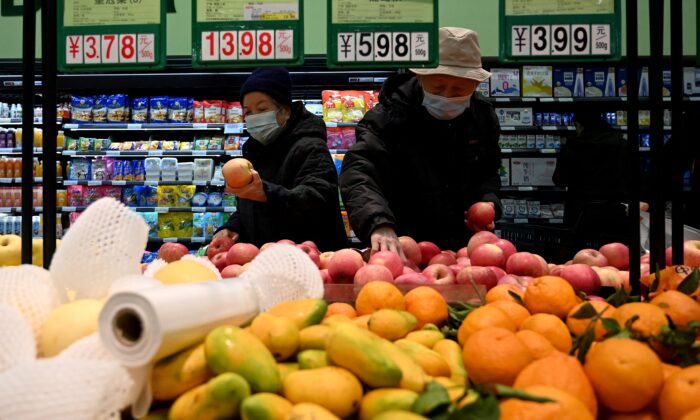 People buy fruit at a market in Beijing on Jan. 17, 2022. (Noel Celis/AFP via Getty Images)
Thinking About China

In the face of mounting economic troubles, Beijing finally blinked.

As the country enters a key month that includes Chinese New Year and the Winter Olympic Games, while faced with an economic slowdown and persistent consumption and property sector issues, the Chinese Communist Party (CCP) decided to bite the bullet and cut interest rates to spur growth.

The People’s Bank of China on Jan. 17 said it would cut the interest rate on one-year medium-term lending facility (MLF) loans—the central bank’s one-year loans to commercial banks—by 10 basis points to 2.85 percent. The move was the first time China’s central bank cut the MLF rate since the beginning of the pandemic. It also cut the seven-day reverse repo rate for the first time in almost two years.

A few days later on Jan. 19, it cut the one-year and five-year loan prime rates, the key benchmark rates behind residential mortgage loans.

China’s easing measures are a stark monetary policy divergence from the United States and many of the Western economies, which are grappling with economic overheating, excess demand, and inflationary pressures.

But China has been on a different track. Consumption is a worry and consumer pricing has been stable.

While the policy easing isn’t a surprise—we’ve said that the country’s economy is weaker than the CCP has let on—it does show that authorities are increasingly concerned about economic growth.

The rate cuts were concurrent with the release of economic data for 2021. The National Bureau of Statistics said that official GDP growth in 2021 was 8.1 percent on a year-on-year basis, while the growth during the fourth quarter rose 4 percent, the weakest official growth rate since the beginning of 2020.

Following a slew of tightening measures during much of 2021, the CCP’s recent efforts in December to ease certain restrictions on real estate funding and land deals have yielded little result in boosting the property market.

As of early January, sentiment is still deteriorating. Consumer spending has declined as virus controls tightened, while the property market is still largely frozen. Developers are suffering from a lack of financing and weak consumer demand for housing.

After a round of key interest rate cuts, the CCP clearly seems concerned about growth. While the pendulum may be swinging toward policy easing, the degree of stimulus may not be as forceful as some may think. The debt-fueled wild wild west days of the 2010s are effectively over.

The new solution is tighter control by the Xi Jinping-led CCP.

Skyrocketing home price gains and credit-fueled homebuilding are unlikely to return. They’re replaced by government-directed real estate developments at a rate of growth carefully dictated by Beijing. The goal is to achieve two of Xi’s near-term goals—a stable financial system and a smaller gap between the rich and the poor.

China’s overleveraged real estate development industry will need to be reformed and restructured through this process. A few financially weak firms may be sacrificed. On Jan. 19, China Aoyuan became the latest property developer to default on offshore dollar bonds. The entire sector is plagued by mismanagement and pockets of corruption. We shouldn’t be surprised if a few real estate executives are swept up in China’s anti-graft, anti-corruption proceedings.

Already, the CCP is preparing for its state-owned enterprises (SOE) to take over. In Evergrande’s home province of Guangdong, Cailian Press reported that government officials have been facilitating meetings between struggling developers and SOEs.

The goal? To encourage privately held developers to merge or partner with SOEs to manage existing projects or obtain financing to continue future developments.

It’s a subtle change. But it’s a sign that decades after the Beijing regime left real estate in the hands of the private sector, Xi has decided that the CCP needs more control.