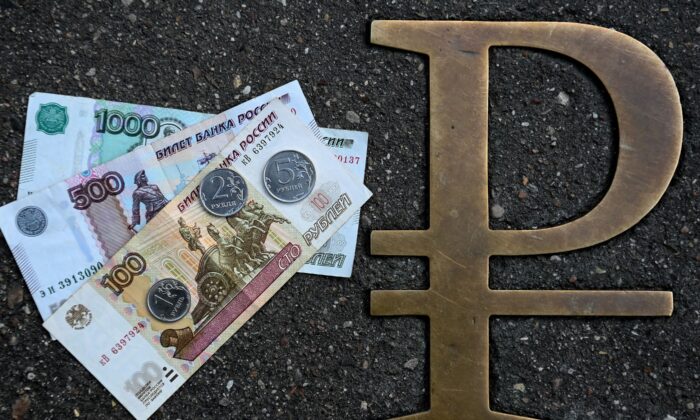 BEIJING—The Chinese regime is easing exchange rate controls to let the Russian ruble fall faster in value against the Chinese yuan to help insulate Beijing from economic sanctions on Moscow.

The margin by which the ruble is allowed to fluctuate against the yuan in state-controlled daily trading will be doubled in size to 10 percent above or below the day’s opening price starting Friday, the China Foreign Exchange Trade System announced.

The ruble has lost about 40 percent of its value since Western governments cut off some Russia banks from the international SWIFT payment system in retaliation for President Vladimir Putin’s Feb. 24 attack on Ukraine. Russia’s central bank was blocked from using its foreign currency reserves to defend the exchange rate.

The Chinese communist regime has avoided joining other governments in criticizing Putin’s attack and has criticized Western sanctions. Chinese companies give no sign they are joining Western counterparts in pulling out of Russia, but economists say they are likely to try to take advantage of pressure on Moscow to try to strike better deals.

Holding the exchange rate steady would require China’s central bank to subsidize Russian buyers of Chinese goods by giving them more yuan for their rubles than market forces said Moscow’s currency was worth.

The latest change would allow Chinese exchange rates to keep up with the ruble’s abrupt daily fluctuations.