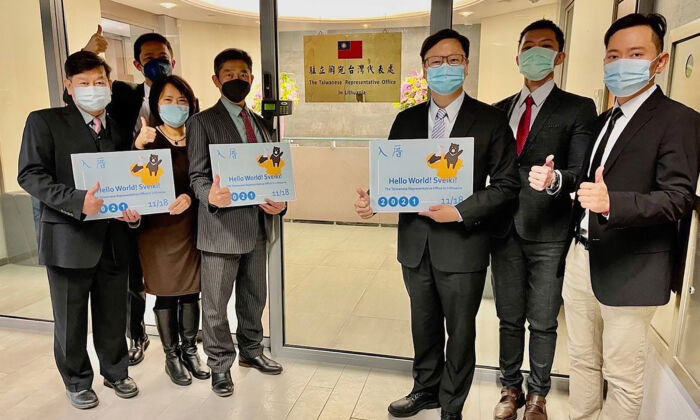 Staff outside the Taiwan Representative Office in Vilinius, Lithuania, on Nov. 18, 2021. (Taiwan Ministry of Foreign Affairs via AP)
Europe-China Relations

Lithuania drew the wrath of the Chinese regime after allowing Taiwan to open an office using its own name in Vilnius this past summer. Beijing recalled its envoy from Lithuania in August and expelled the Lithuanian ambassador from China. The regime also reportedly has stopped issuing new export permits for Lithuanian food.

The Chinese regime has claimed self-ruled Taiwan as its own territory, to be taken by force if necessary. It has also pressured other governments to adopt its claims by attempting to stop them from forming ties with the democratically governed island.

Lithuania’s move “undermined China’s sovereignty and territorial integrity, and grossly interfered in China’s internal affairs … creating an egregious precedent in the world,” Beijing’s Foreign Ministry said in a Nov. 21 statement. “The Lithuanian government must bear all the ensuing consequences.”

The regime said it would downgrade diplomatic relations to the level of charge d’affaires.

China’s Foreign Ministry urged Lithuania to “immediately put right its mistake” and warned that Taiwan’s attempts to seek foreign support would go down “a dead end.”

“Lithuania reaffirms its adherence to the ‘One China’ policy, but at the same time has the right to expand cooperation with Taiwan and to receive and establish non-diplomatic representations for ensuring the practical development of such ties, the way many other countries do,” the ministry said in a statement.

Most countries, including the United States, currently have no diplomatic ties with the island, but they maintain relationships with Taiwan by setting up trade offices. Taiwan’s representations in those countries are under the name of the city Taipei, Taiwan, a term used to avoid drawing the ire of the communist regime.

Taiwan’s Mainland Affairs Council has denounced China’s “rudeness and arrogance,” saying that Beijing had no right to comment on something that wasn’t an internal Chinese affair and was purely a matter between Taiwan and Lithuania.

On Nov. 19, U.S. Under Secretary of State Uzra Zeya told a news conference in Vilnius that Washington rejected other countries’ interference in Lithuania’s relationship with Taiwan. The United States has also offered the Baltic nation financial support by confirming that it would sign a $600 million export credit deal between Lithuania and the U.S. Export-Import Bank in the near future.

Lawmakers around the world appealed for solidarity with Lithuania and Taiwan in September.

U.S. Secretary of State Antony Blinken, in a phone call with Lithuanian Foreign Minister Gabrielius Landsbergis in August, reaffirmed the United States’ “ironclad” support of the Baltic state in the face of the Chinese regime’s coercive behavior.