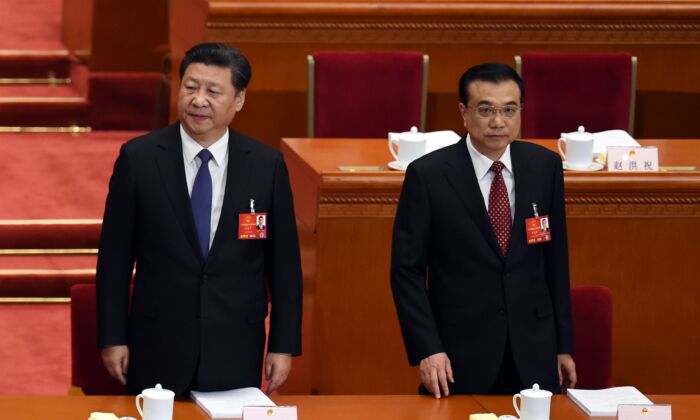 A few months ago, Chinese leader Xi Jinping touted “common prosperity.” But in recent weeks, Beijing has barely mentioned it and instead began referring to a modified version of the policy, called “third distribution.”

“Common prosperity” is broadly believed to be a method of “killing the rich to help the poor,” which means the rich are forced to share their wealth with the poor.

The Chinese Communist Party (CCP) began talking about “third distribution” after the “common prosperity” policy caused major concern among private business owners, who fear they might lose all their wealth.

Chinese entrepreneurs faced a similar challenge years ago, when the regime promoted its “Guo Jin Min Tui” policy, which means “state-owned enterprises are to lead the economy and private industries are to retreat.” This was eventually replaced by “common prosperity.”

During the CCP’s most important annual meeting, which was held from March 4 to March 11, Xi mentioned “common prosperity” once. It’s noteworthy that it coincided with when he met with the delegation from Inner Mongolia on March 5.

During the “Two Sessions,” China’s rubber-stamp legislature (the National People’s Congress) and the National Committee of the Chinese People’s Political Consultative Conference discuss the country’s economic situation from the previous year, and set policies and growth targets for the coming year.

Chinese Premier Li Keqiang mentioned “common prosperity” once in this year’s Government Work Report. The CCP translated the original Chinese phrase as “prosperity for all” in its official English version of the report, which was released on March 12.

It seems the CCP recently downgraded the importance of “common prosperity.”

By comparison, an article published by state-run media Xinhua on Aug. 17, 2021, mentioned “common prosperity” 17 times when it reported on the regime’s Central Financial and Economic Commission’s meeting, which was hosted by Xi in Beijing. “Common prosperity” was even part of the headline.

On Jan. 17, Xi spoke briefly at the World Economic Forum’s annual meeting, in which he claimed that “common prosperity” wasn’t egalitarianism, but it offered a way for the rich to lift the poor out of poverty. However, Chinese economists disagree.

Xi proposed “common prosperity” after he took office in 2012, heavily promoted the policy since 2020, and ordered the regime in August 2021 to find solutions to eradicate poverty by 2050, thus achieving “common prosperity.”

The policy has been criticized by overseas China observers, who believe that it’s merely a political slogan to hide the CCP’s real intention: to seize the assets of wealthy individuals and fill the coffers of the regime.

“‘Kill the rich’ started a while ago [in China], such as when Beijing fined big private companies and movie stars,” U.S.-based freelance writer Zhuge Mingyang told the Chinese-language Epoch Times on Aug. 21, 2021.

“The reality is that the regime ‘kills’ the rich, but it doesn’t use their wealth to help the poor. The Chinese Communist Party confiscates private properties and occupies them as Party properties.”

China has an unbalanced wealth distribution. Overall, some provinces are richer than others, while some cities own more wealth than others. People in urban areas have higher disposable incomes than those living in rural areas.

The NBS only provided data on the provincial level, which is an inaccurate depiction of inequality across the country.

Li revealed in May 2020 that roughly 600 million Chinese citizens earn only 1,000 yuan ($157) a month, which isn’t enough to pay for monthly rent on a one-bedroom apartment in a mid-sized Chinese city. To help these people make ends meet, Li suggested they take up flexible employment, including setting up street stalls.

At the same time, Hurun Report released its annual list of China’s 100 richest individuals on Sept. 15, 2021. All these people are billionaires, with Zhong Shanshan as China’s richest man, worth 390 billion yuan (about $61.2 billion).

Chinese economist Li Yining wrote in his book, which was published in 1994, that the income distribution under a market economy has three levels. The first level is market orientation, the second is government intervention, and the third is social welfare (more specifically, the rich donate to the poor out of compassion and sympathy).

It’s unclear whether the CCPs “common prosperity” policy can actually help the poor. But under the “third distribution” policy, entrepreneurs have to donate their wealth to society in order to survive.

In China, ordinary citizens must follow the official’s “encouragement.”

“I donated four million yuan ($628,000) last month for a charitable cause to respond to the local government’s call that entrepreneurs should show support for the party’s ‘common prosperity’ initiative,” Li told the Post.

“In addition, I’m now paying more in wages to employees and contributing more to their pension and medical packages.”

“They donated at the same time, which is like they were paying the protection fees,” Chen Honda, senior researcher at Taiwan Academy of Banking and Finance, told Radio Free Asia (RFA) in July 2021.

Yen Chien-Fa, a professor at Chien Hsin University of Science and Technology, told RFA in the same report: “I believe that they were forced to donate. … The entrepreneurs have to donate their wealth to save their lives.”