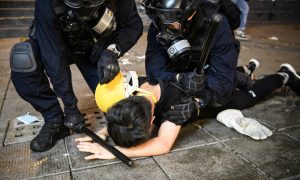 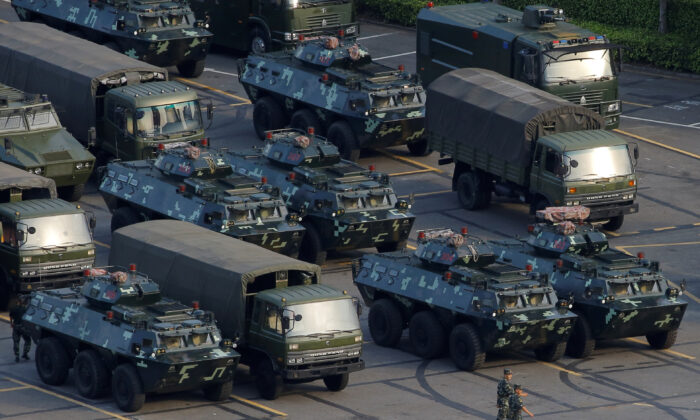 Military vehicles are parked on the grounds of the Shenzhen Bay Sports Center in Shenzhen, China on Aug. 15, 2019. (Thomas Peter/Reuters)
HK Current Affairs

HONG KONG–China has quietly more than doubled its deployment of mainland security forces in Hong Kong, according to foreign envoys and security analysts, in the most dramatic move yet by Beijing to prepare for a potential worsening of unrest in the global financial center.

Last month, Beijing moved thousands of troops across the border into this restive city, which has been wracked by protests since June. The state news agency Xinhua described the operation as a routine “rotation” of the low-key force China has kept in Hong Kong since the city’s handover from Britain in 1997.

A month on, seven Asian and Western envoys have told Reuters they are certain the late-August deployment was not a rotation at all, but a reinforcement. Three of the envoys said the number of Chinese military personnel in Hong Kong had more than doubled since the protests began in June. They put the number of Chinese military personnel at 3,000 to 5,000 in the months before the reinforcement, and estimated it was now between 10,000 to 12,000.

As a result, the envoys believe, China has now assembled its largest-ever active force of People’s Liberation Army (PLA) troops and other anti-riot personnel and equipment in Hong Kong.

Significantly, five of the diplomats say, the reinforcement includes elements of the People’s Armed Police (PAP), a mainland paramilitary anti-riot and internal security force under a separate command from the PLA. Until now, the presence of the PAP in Hong Kong has not been publicly known.

China’s Ministry of National Defense, the State Council Information Office, and the Hong Kong and Macau Affairs Office did not respond to questions from Reuters.

The office of Hong Kong Chief Executive Carrie Lam and the PLA garrison in Hong Kong also did not respond to questions. A Hong Kong police spokesperson told Reuters the police force was “capable of maintaining law and order and determined to restore public safety in Hong Kong.”

The protests in the city erupted in response to a move by Lam to propose a now-scrapped bill that would have allowed for the extradition of people from Hong Kong to China.

The reinforcement in Hong Kong includes equipment tailor-made for the quelling of urban violence, including water cannon vehicles and trucks used to lay barbed wire barricades. Reuters reporters have tracked increased activity at many of the PLA’s 17 facilities across Hong Kong, Kowloon and rural New Territories, most of which were inherited under agreement with the departing British forces during the 1997 handover.

“They do seem to have an active contingency plan to deal with something like a total breakdown in order by the Hong Kong police,” said Alexander Neill, a Singapore-based security analyst at the International Institute for Strategic Studies.