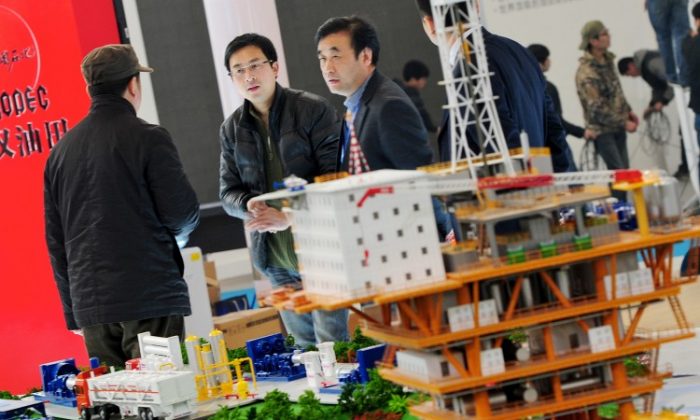 Patrons attend an oil and petroleum exploration exhibition in Beijing on March 21, 2012. Part of the goals of the Chinese regime are to attempt to further develop domestic energy resources. (Mark Ralston/AFP/Getty Images)
China

China is worryingly dependent on foreigners for key energy resources like oil and gas, according to a recent report from the Chinese Communist Party’s external propaganda office.

The white paper does not propose any easy solutions for the problem.

Mr. Fang, an energy expert at a major oil production center in China, who spoke under condition of anonymity, said in a telephone interview with The Epoch Times that the stability and safety of external supply, along with prices, is outside China’s control, and to him that’s a cause for concern.

Part of the goals of the regime are therefore to attempt to further develop domestic energy resources, and also to bring private capital on board to access that domestic potential.

The latter may not be a successful strategy in China, according to Chen Liuqin, an energy expert with the China Institute of Energy Economics, in an article on a Chinese investment website.

“Private capital has problems when entering the mining and resource sectors, which makes it difficult for them to compete with state-owned enterprises. Given these limitations, private capital doesn’t dare to enter this sector, even when the government encourages them to,” Chen wrote.

The Party’s “12th Five-Year Plan on Energy Development,” to run from 2011 to 2015, proposes dealing with the problem of external dependence by constructing nuclear power plants. Lin Boqiang says the third generation plants that would be able to play a role in meeting China’s energy needs are still in the research phase, and could be a long way off widespread implementation.