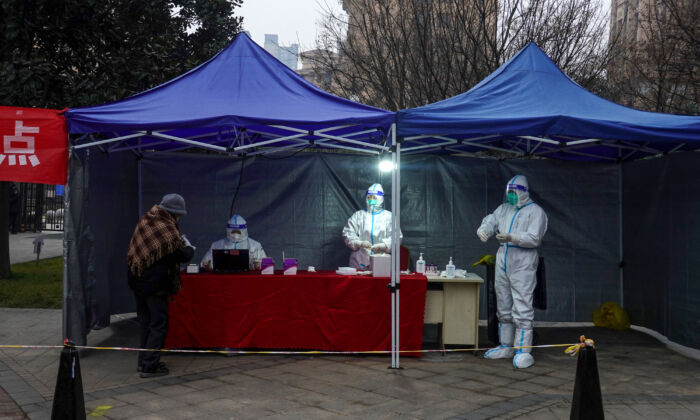 A resident prepares to undergo a nucleic acid test for COVID-19 in Xi'an, in northwestern China's Shaanxi Province on Jan. 4, 2022. (STR/AFP via Getty Images)
INSIDE CHINA

The Chinese regime dismissed an official who posted on social media about the sufferings of Xi’an residents under its strict COVID-19 rules, and criticized the city’s handling of the outbreak.

The official posted about a 31-year-old man who walked eight days and nights to his hometown to escape the harsh lockdown in the central-north city of Xi’an.

Two other Xi’an migrant workers had the same purpose, with one riding a bike for 10 hours in the icy night, and another swimming across a frozen river.

However, the official’s post was designated as a rumor, removed from the internet, and censored by the regime.

“After studying, we decided to dismiss Song Wentao from the position of deputy director of the Organization Department of the Grass-roots Construction Division,” the All-China Federation of Returned Overseas Chinese (ACFROC) announced on Jan. 6.

The ACFROC is a key organ of the Chinese regime’s United Front Work Department, whose role is influencing elite individuals and organizations inside and outside China to support the regime. Song, as a senior official from ACFROC, used to visit different Chinese cities to check their performance in reintegrating Chinese people who returned from overseas.

“The account Qingfengmingyue Lou posted an article headlined ‘Xi’an people’s sorrows: why some of them fled Xi’an even risked their lives and broke the law’ on WeChat on Jan. 2,” The center announced. “The account is held by Song Wentao.”

The center claimed that Song’s post collected people’s complaints online, “ignoring all the residents’ efforts against the epidemic.”

Although the center said what Song posted isn’t true, Xi’an residents and announcements by local police confirmed the cases that Song detailed in his post.

Song detailed the situations of Xi’an residents’ lives under the strict lockdown in his post, such as people not having a solution to buy food and other necessaries, and not being able to visit hospitals.

“Xi’an residents are worried about death from sickness and hunger, rather than COVID-19,” Song concluded in his post.

In the post, Song listed three men who fled the city when the regime announced the lockdown, but were detained by police before they could arrive at home in other cities in Shaanxi Province. Xi’an is the capital of northwestern China’s Shaanxi. Due to the lockdown, the regime stopped all public transportation in Xi’an, and people couldn’t get out by train, bus, car, or airplane.

“Without supplements and GPS, [the 31-year-old man] walked eight days and nights, climbed over the vast mountains, waded through the icy rivers, entered Yangtze River Basin from Yellow River Basin, and crossed the Qinling—the line separated north and south in China,” Song wrote.

The man Song mentioned is from a rural area in Ankang city in southern Shaanxi, where people eat the food they plant. In Xi’an, the man rented a room in a village close to Xianyang Airport and made a living by selling clothes at a street vendor stand.

After the city was locked down, the man couldn’t make any money but needed to buy food and pay rent. He decided to go home although there’s no public transportation and checkpoints to prevent people from traveling at every village and township.

The man left his rented room on Dec. 16 and was detained by police in Ningshan County on Dec. 24, about 75 miles away from the airport. During the eight days, he only took naps in the early afternoons when there’s sunshine. All other times, he kept on walking because it was too cold to sleep.

Song lamented the hardships sufferred by medical workers who performed the tests on streets in Xi’an. “After a snow, the wind was big and cold. The medical workers on the streets had to spray disinfection between tests. Almost all their hands were blue because of the cold.”

Song expressed his sorrow for all Xi’an ordinary residents who were locked at home but couldn’t obtain food, who were sick but couldn’t receive any treatment, and who were forced to take tests as the health code system that the regime uses to perform the tests crashed.

Song criticized the Xi’an officials who strictly banned people from helping each other as the officials used the opportunity to earn money. He listed examples:

A vegetable dealer found a way to purchase and ship vegetables to the residential compound where she lives, but the guards in the compound didn’t allow her to sell. The Xi’an government arranged guards in each residential compound to prevent residents from leaving their homes. At the same time, it ordered all residents to only buy vegetables from an untrustworthy company. Song shared the company’s advertisement that showed the price of a box of vegetables was 438 yuan ($69).

“An ordinary official knows the Chinese Communist Party’s (CCP) rules very well. They don’t dare to say the things which might anger the regime, not to mention the dismissed official is a senior official,” U.S.-based China affair commentator Tang Jingyuan told The Epoch Times on Jan. 8. “Even a self-censored official is dismissed because of an online post, you can imagine how tightly the Chinese regime controls people’s speech.”

On Jan. 8, a video about Xi’an quickly spread on China’s social media before it was censored. In the video, two regime staff distributed food to a family and asked the resident to thank the government before taking the food.

On Jan. 5, a report revealed that some Xi’an residents were asked to censor themselves.