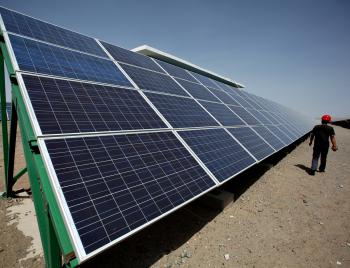 Epoch Times Staff
View profile
Follow
biggersmaller
Print
The United States has accepted a petition from the United Steelworker’s Union that charges the Chinese regime with unfair practices in support of its clean energy sector. The United States may now file a formal complaint with the WTO.

The union said that the Chinese regime’s policies put U.S. clean energy companies at a disadvantage in the marketplace.

This accusation by the union is the latest instance of a U.S-China trade dispute. Tensions between the United States and China over trade have been rising in recent months as U.S. lawmakers have labeled China as a currency manipulator. If the yuan is undervalued, then China’s exports have a competitive advantage in the global marketplace.

China’s Ministry of Commerce called thea complaint from thea U.S. trade group over the country’s clean energy sector union “groundless,” according to a statement on Monday.