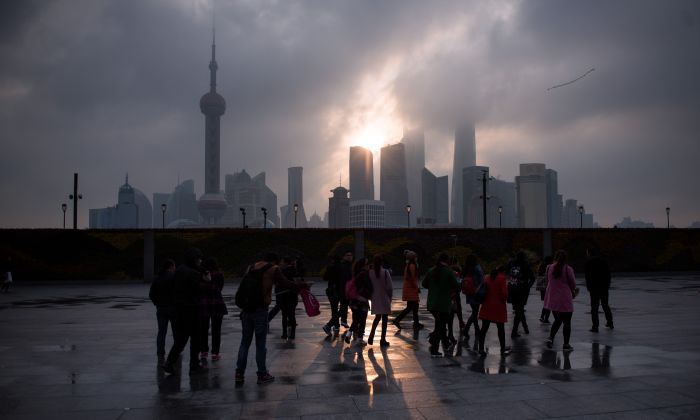 A group of tourists stand by the Bund near the Huangpu river across the Pudong New Financial district, in Shanghai, China on March 14, 2016. (Johannes Eisele/AFP/Getty Images)
Chinese Regime

A Canadian citizen has been detained in the Chinese city of Yantai, a Canadian government spokesman said on July 13, an incident that comes amid chilly diplomatic relations between the two countries.

Global Affairs, as Canada’s foreign ministry is known, didn’t provide further details or say whether the case was related to the detention of 16 foreign teachers and students earlier in the week.

Meng is indicted in the United States on charges of fraud relating to violations of U.S. sanctions against Iran.

The Globe and Mail reported on Jan. 3 that Global Affairs spokesman Guillaume Bérubé said that at least 13 Canadians had been detained in China since Meng was arrested last year.

Bérubé confirmed that eight of the 13 detained Canadians have been released.

Besides Kovrig and Spavor, another Canadian in China, Robert Schellenberg, was sentenced to death in January for his involvement in a drug case, an escalation of his previous 15-year prison term. A second Canadian man, Fan Wei, was given the death penalty in April for drug offenses.

On July 9, police in Xuzhou, a city in eastern China’s Jiangsu Province, said it had detained 19 people on drug-related charges and that 16 of them were foreigners. Yantai is about 385 miles from Xuzhou.

The British Embassy in Beijing said on July 12 that four British nationals were arrested as part of the drug raid in Xuzhou.

Of the 12 Taiwanese securities analysts detained on July 9, nine were released after they posted bail, while the remaining three are still detained under unspecified criminal charges, Taiwan’s Mainland Affairs Council said.

According to Taiwan’s Central News Agency (CNA), all of the analysts work for Thousand & Billion Education and Trading Co., a Shanghai-based company that offers securities-related programs and lessons.

CNA, citing an insider from the company, reported that the analysts didn’t have licenses to engage in securities-related work in mainland China, but only had Taiwanese licenses.

Thousand & Billion Education told CNA that the company had “not experienced any abnormalities.” But the company suspended its programs on July 9, citing a system failure. The programs weren’t restored until July 14.

The arrests occurred just one day after the U.S. State Department approved a possible sale to Taiwan of $2.2 billion worth of military equipment, including M1A2T Abrams tanks and Stinger missiles.

The detention also came two days before Taiwan President Tsai Ing-wen stayed in New York for two nights on July 11, while in transit to the Caribbean, a trip that has angered the Chinese regime, which views the self-ruled democratic island as a wayward province.