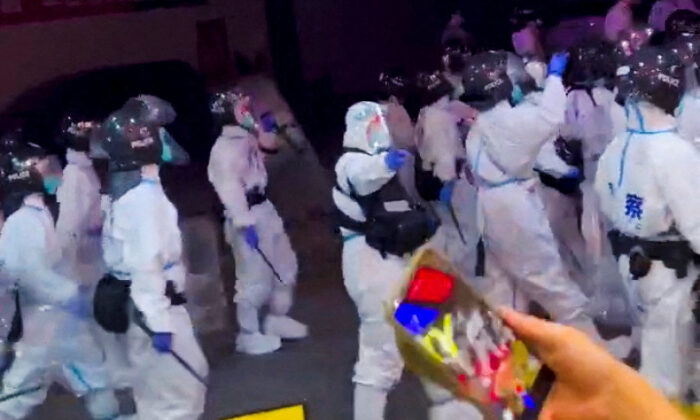 Riot police in personal protection suits walk down a street, during protests over COVID-19 restrictions in Guangzhou, a city in Guangdong Province, China, in this screen grab taken from a social media video released on Nov. 29, 2022. (Video Obtained by Reuters/via Reuters)
By Frank Fang

Chinese riot police in white hazmat suits clashed with people in southern China’s Guangzhou city on the evening of Nov. 29, according to online videos seen by Reuters.

In one Twitter video, dozens of riot police holding shields advanced in formation over what looked like torn-down lockdown barriers, while objects were thrown in their direction. Later, police were seen escorting people in handcuffs away from the site.

The videos were filmed in Guangzhou’s Haizhu district, Reuters stated, although the news agency couldn’t determine the sequence of events or what might have sparked the clashes.

Social media posts indicated that the clashes were sparked by local lockdown restrictions, according to Reuters.

Haizhu district was the site of a major protest in mid-November, when more than 1,000 residents took to the streets in protest against prolonged local lockdown measures. They sought greater access to food, essential supplies, and medical treatment.

Protests broke out across China over the weekend of Nov. 26–27, driven in part by anger over a horrific fire in China’s far-western Xinjiang region that killed an officially reported 10 people. Local COVID-19 restrictions apparently prevented residents from escaping the fire and delayed first responders from reaching the scene.

The bigger reason behind the protests is mounting public discontent over the Chinese communist regime’s unrelenting zero-COVID policy, which subjects people to repeated testing and confinement to their homes.

Protesters used the rallies to call for greater freedoms, while some demanded that Chinese leader Xi Jinping and the Chinese Communist Party (CCP) step down.

Since the deadly fire, there have been 43 public protests across 22 cities in China, according to a tally by Nathan Ruser, a researcher at the Australian Strategic Policy Institute.

In the face of the largest display of civil disobedience CCP leaders in Beijing have seen in decades, Chinese officials have begun tracking down protesters, and even arresting them.

“One of my friends who posted a video of people calling for Xi to step down was taken away by police last night,” a Beijing resident who asked not to be identified told Reuters.

“Other friends who posted similar videos had to go to the police station. Most were kept for a few hours and asked to sign a paper promising they won’t do that again. And most have now deleted their posts.”

On Nov. 28, a protester in Beijing, who asked not to be identified for her safety, told AFP that she and five of her friends had been contacted by local police.

“He said my name and asked me whether I went to the Liangma river last night… he asked very specifically how many people were there, what time I went, how I heard about it,” the protester said.

At least 1,000 people, separated into two groups, gathered along Beijing’s 3rd Ring Road near the Liangma river early on Nov. 28.

The Chinese regime’s top law enforcement body, the Central Political and Legal Affairs Commission, issued a statement on Nov. 29 warning of what it called “hostile forces,” following a meeting presided over by its Party secretary, Chen Wenqing.

“The meeting emphasized that political and legal organs must take effective measures to … resolutely safeguard national security and social stability,” the statement said, according to The Associated Press.

While the statement didn’t refer to the protests, Hu Xijin, former editor-in-chief of China’s hawkish state-run outlet Global Times, took to Twitter to say it was a warning against protesters.

“The Chinese officials used implicit language, but they also conveyed a clear message of warning,” Hu wrote. “The protesters must have understood it. If they repeat those protests, the risks will increase severely.”

Lawmakers from around the world have expressed their solidarity with the protesters in China.

Meanwhile, rights groups have called on Chinese authorities to respect the right to peacefully protest.

“Instead of penalising the people, the government should listen to their calls. Authorities must let people express their thoughts freely and protest peacefully without fear of retaliation,” Hana Young, Amnesty International’s deputy regional director, said in a statement released on Nov. 27.

“The Chinese government must immediately review its Covid-19 policies to ensure that they are proportionate and time-bound. All quarantine measures that pose threats to personal safety and unnecessarily restrict freedom of movement must be suspended.

“The government also needs to promptly, effectively, and thoroughly investigate the Urumqi fire, to avoid a reoccurrence, bring justice to the victims and their families, and show the people they are responsive to their grievances.”