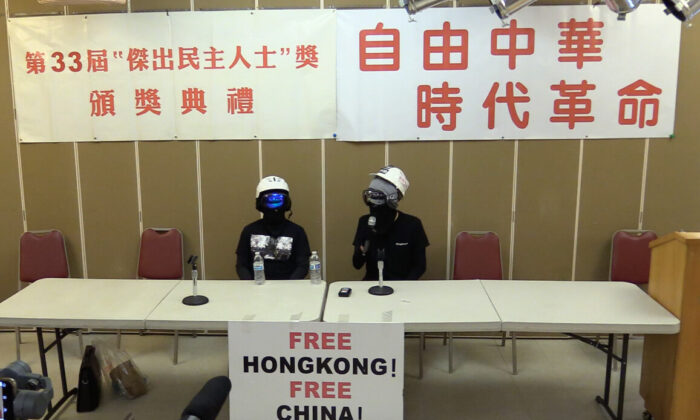 The 2019 annual awards were given to two Chinese groups who have worked against the Chinese communist regime’s tyranny: Hong Kong protesters, and the ordinary Chinese people who supported the 1989 Tiananmen Square pro-democracy movement.

The ongoing Hong Kong protests have lasted for close to five months. Since no single person or group can claim the leadership of the protests, the Hong Kong protesters were nominated and rewarded as a whole group.

Fang Zheng, president of CDEF, explained that the reason the supporters of the 1989 movement received an award was that, in the past, the awards had only been given to prominent figures, and CDEF had never officially recognized the ordinary people’s support.

The two protesters said that Hongkongers have tried and failed in every normal way in the past to protect their freedoms. They said that Hong Kong’s law enforcement system has been “dysfunctional” and that “psychologically, Hong Kong’s police force has become an army.”

The two CPC members said that they have reached more and more people in Hong Kong.

A pro-democracy group from Los Angeles announced at the event that they have raised $2,240 for Hong Kong protesters to make T-shirts printed with the U.S. Declaration of Independence.

Lin Muchen, former president of CDEF, presented this year’s award to the supporters of the 1989 movement.

In his speech, Lin named three incidents that defined the nature of the pro-democracy movement 30 years ago: a democracy goddess statue was erected in front of Chairman Mao Zedong’s picture at Tiananmen Square; three activists threw dye at Mao’s picture; and the “tank man” stood in front of Chinese military tanks.

Lin said that many ordinary people who supported the 1989 movement lost their lives when fighting against the Chinese military. He remembered that fights against Beijing’s tyranny lasted for months in the cities of Beijing, Chengdu, and Shanghai after the June 4 Tiananmen Square Massacre.

Zhao Changqin, a pro-democracy activist from China, received the award for the supporters of the 1989 movement.

Zhao was a college freshman at the time of the Tiananmen Square Massacre. After the massacre, he was jailed six times in China—for a total of 11 of the past 30 years—for promoting democracy. He was one of the sponsors who initiated the Global Alliance to Support Hong Kong.

Sheng Xue, a pro-democracy activist for China who is also a renowned writer and poet, spoke at the event. She urged all overseas pro-democracy groups to work together to form a global anti-communist alliance.

Sheng said that the Chinese regime today is a system that combines communism, fascism, and terrorism. She said that the regime has been in total control of how the 1.4 billion Chinese people live their lives.

She said that the international society, after the 1989 massacre, mistakenly believed that helping China’s economic growth could change the country for the better. However, the growing economy has given the regime more power to use lies, political violence, coercion, and monopoly to push the 1.4 billion Chinese people in a wrong direction, she believes.

She said that the current direction that China’s huge population is moving in, if it is not stopped soon, may in the future threaten the existence of the world’s modern civilization.

Sheng also said that since the 2008 Beijing Olympic Games, the regime has become much more influential in the Western world. She concluded that it is an urgent matter to establish a global anti-communist alliance.

Sheng is from Canada, and she told the audience that an organization called Canadian Correlation against Communism was officially formed last December.

CDEF is a non-profit organization based in San Francisco. Its mission is to promote democracy, rule of law, and human rights in China. It was established in 1985 and has been giving annual awards since 1986 to groups and persons who made extraordinary contributions to improving China’s freedom, democracy, and human rights.