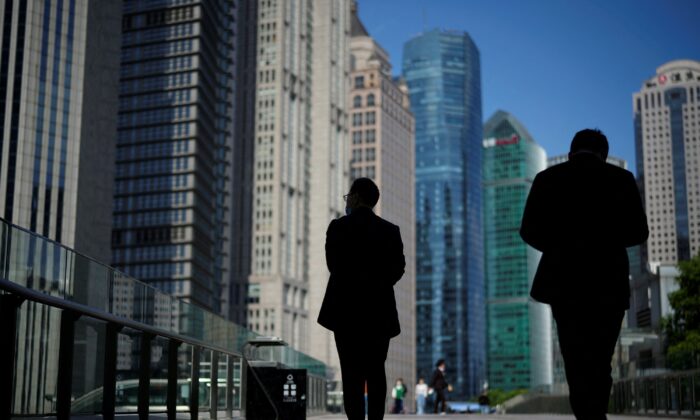 People walk by office towers in the Lujiazui financial district of Shanghai on Oct. 17, 2022. (Aly Song/Reuters)
By Reuters

BEIJING—China delayed the release of economic indicators scheduled for publication this week, including its third-quarter gross domestic product data due on Tuesday, according to an updated calendar on the statistics bureau’s website.

The highly unusual delay comes amid the week-long political conference of the ruling Chinese Communist Party (CCP), a twice-a-decade event that is an especially sensitive time in China.

The data for third-quarter gross domestic product (GDP)—originally scheduled for release at 10:00 a.m. (0200 GMT) on Tuesday—has been highly anticipated after the world’s second-largest economy grew just 0.4 percent in the second quarter from a year earlier.

A person answering the telephone in the media office at the National Bureau of Statistics (NBS) said the change was “due to adjustment to work arrangements” but gave no further details.

No date for a rescheduled release has been given.

September releases for a host of other figures including industrial production, retail sales, and the urban jobless rate that are typically issued along with the GDP data had also been delayed, according to the NBS website.

Also delayed was data for China’s home prices for September, which had been scheduled for publication on Wednesday.

The delays followed the unexplained delay in the release of September’s trade data by the General Administration of Customs, which had been due out on Friday.

The trade statistics had been expected to show China’s export growth weakened further from August, dragged down by soft global demand, while its imports remained tepid.

The trade data was not released on Monday and calls to the customs administration seeking comment went unanswered.

At the conclusion of this week’s CCP meeting, Chinese leader Xi Jinping is widely expected to win a precedent-breaking third leadership term.

At the last party meeting, in 2017, third quarter GDP data was released as usual.