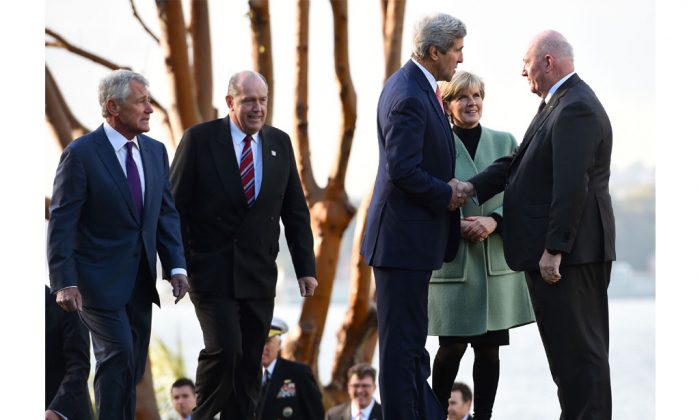 China Declares Australia a Military Threat Over US Pact

China’s state-run media have declared Australia a threat to its national security, after Australia finalized a 25-year military pact with the United States.

The United States currently has 1,200 troops from the Marine Corps and Air Force training with Australian troops for humanitarian and disaster relief. The defense agreement will increase the number of U.S. troops at Darwin in northern Australia to 2,500.

The Chinese regime is none too pleased about the agreement, however.

“Australia is therefore likely to become a threat to China’s national security,” it states.

Global Times reported that if a war broke out between China and Vietnam or the Philippines, the United States could deploy submarines and aircraft from Australia.

Hagel said during a press conference, “This is a part of the world that represents five of America’s seven treaty obligation countries that we are committed to, which we’ve made very clear we’re committed to.”

Johnston said the U.S. troops are helping train the Australian military. “The Marines, of course, are the world’s experts in amphibious combat and amphibious operations,” he said during the press conference. “And so, we’re watching as to how those operations are carried out.”

The recent troop increase is part of a 2011 agreement between the United States and Australia. It was in turn part of the Asia Pivot, which has focused the U.S. military on the Asia Pacific region.

The number of U.S. troops in Australia is comparatively small. Secretary of Defense Chuck Hagel said during an Aug. 12 troop event in San Diego that the United States has 360,000 men and women currently deployed in the Asia Pacific.

China has previously threatened Australia for aligning with the United States.

A source who formerly worked in U.S. intelligence told Epoch Times that, around 2010 and early 2011, China was trying to strong-arm Australia with indirect threats.

The threat went along the lines of “If Australia was attacked, the United States wouldn’t get here in time to save you. You should align with China instead.”

Not long after, however, the United States signed the agreement with Australia and began stationing U.S. marines and airmen in the country.

In response, China’s Global Times published an article in November 2011 that brought its threats to the surface. “The U.S. military presence in Australia will not change matters in the short-term,” it stated. “It remains to be seen how Australia will behave in the future and how China is going to respond.”

“But one thing is certain,” it added,” if Australia uses its military bases to help the U.S. harm Chinese interests, then Australia itself will be caught in the crossfire.”