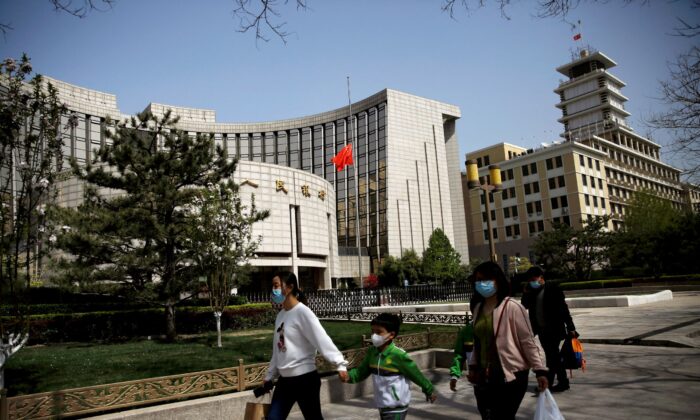 SHANGHAI—China cut its lending benchmark loan prime rate (LPR) for the first time in 20 months on Monday, in a bid to prop up growth in the slowing economy, although it remains wary of loosening conditions in the country’s highly leveraged property market.

The one-year LPR was lowered by 5 basis points to 3.80 percent from 3.85 percent previously, while the five-year LPR remained at 4.65 percent.

The reduction marks the first LPR cut since April 2020.

Twenty-nine out of the 40 traders and economists polled by Reuters last week predicted cuts in LPR.

Most new and outstanding loans in China are based on the one-year LPR while the five-year rate influences the pricing of home mortgages.

However, he noted the decision to keep the five-year rate unchanged showed Beijing preferred “not to use the property sector to stimulate economic growth.”

Some analysts said the central bank’s two reserve requirement ratio (RRR) cuts this year have allowed institutions to lower their costs of lending, with the two cuts saving banks up to 28 billion yuan ($4.39 billion), according to Goldman Sachs’ estimates.

While Beijing’s move to lower the LPR was widely expected, it highlights China’s monetary policy divergence from other major central banks, which are set to raise interest rates.

Some analysts expect Beijing could ease further to arrest the economic slowdown, although they remain divided over the easing trajectory.

A slew of recent economic indicators, including retail sales and investment growth, point to a slowing economy, while a regulatory clampdown on the tech sector has dampened investor sentiment. New curbs to fight rising COVID-19 cases could further pressure growth.

“We expect a further 45 bp of cuts to the one-year LPR during 2022,” Mark Williams, chief Asia economist at Capital Economics, said in a note.

ANZ’s Xing expects another RRR cut in early 2022 amid mounting credit risks in the property sector.

He expects Beijing to lower interest rates on the central bank’s medium-term lending facility (MLF) by 10 bps in the first quarter of 2022, followed by more LPR reductions.

However, Li Wei, senior economist for China at Standard Chartered, expects no broad-based RRR cut or policy rate cuts in 2022.

“We maintain our call for no change in the seven-day reverse repo rate and the one-year MLF rate in 2022, as major central banks are expected to tighten monetary policy and China’s CPI should trend higher on PPI passthrough and rising pork inflation,” Li said.