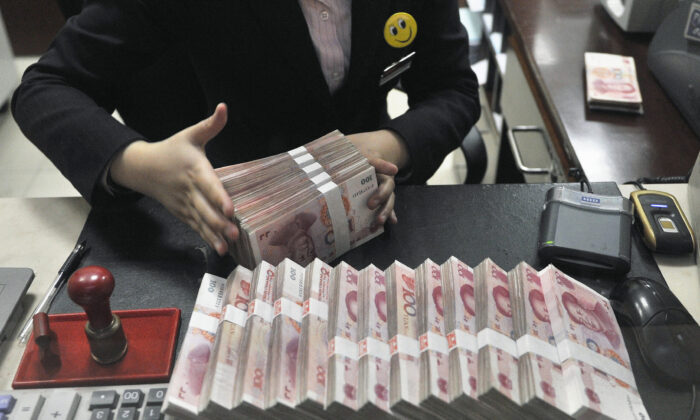 A clerk arranges bundles of 100 Chinese yuan banknotes at a branch of China Merchants Bank in Hefei, Anhui Province, China on March 17, 2014. (Reuters)
By Reuters

BEIJING—China’s central bank said on Jan. 1 it was cutting the amount of cash that all banks must hold as reserves, releasing around 800 billion yuan ($114.91 billion) in funds to shore up the slowing economy.

The People’s Bank of China (PBOC) said on its website it will cut banks’ reserve requirement ratio (RRR) by 50 basis points, effective Jan. 6. The move would bring the level for big banks down to 12.5 percent.

The PBOC has now cut RRR eight times since early 2018 to free up more funds for banks to lend as economic growth slows to the weakest pace in nearly 30 years.

Many investors had expected Beijing to announce more support measures soon. While recent data has shown signs of improvement, and Beijing and Washington have agreed to de-escalate their long trade war, analysts are unsure if either will prove sustainable and forecast growth will cool further this year.

Freeing up more liquidity now would also reduce the risks of a credit crunch ahead of the long Lunar New Year holidays later this month, when demand for cash surges. Record debt defaults and problems at some smaller banks have already added to strains on China’s financial system.

The PBOC said it expects total liquidity in the banking system to remain stable ahead of the Lunar New Year.

Of the latest funds released, small and medium banks would receive roughly 120 billion yuan, the central bank said, stressing that it should be used to fund small, local businesses.

The PBOC said lower reserve requirements will reduce banks’ annual funding costs by 15 billion yuan, which could reduce pressure on their profit margins from recent interest rate reforms. Last week, it said existing floating-rate loans will be switched to the new benchmark rate starting from Jan. 1 as part of a broader effort to lower financing costs.

Analysts at Nomura had forecast the PBOC would deliver a system-wide 50 bps cut in the RRR before the holidays, together with an added reduction for some smaller banks.

Analysts say the U.S-China Phase One trade deal, expected to be signed this month, will relieve only some of the pressure weighing on the Chinese economy, which has also been weighed down by sluggish domestic and global demand, slowing investment and weakening business confidence.

China plans to set a lower economic growth target of around 6 percent in 2020, relying on increased state infrastructure spending to ward off a sharper slowdown, policy sources said. Growth has cooled from 6.8 percent in 2017 to 6 percent in the third quarter of 2019, the slowest since the early 1990s.

Smaller, private firms have been particularly hard hit as regulators clamped down on riskier types of financing and debt.

Despite Beijing’s urging, commercial banks have been reluctant to lend to such firms as they are considered bigger credit risks than state-owned firms.

Tang Jianwei, a senior economist at Bank of Communications in Shanghai, expects two to three RRR cuts this year and a further 25-30 bps reduction in the loan prime rate.

But officials have repeatedly pledged not to resort to “flood-like” stimulus like that in past economic downturns, which left a mountain of debt and stoked fears of property market bubbles.